Are you ready for some football?  Some fantasy football?  Well, we here on the ship are.  Officially, I mean, we’re ready.  The Talkingship Fantasy Football League drafted on Thursday and everyone came out feeling like their team was unbeatable.  Hey, it’s the preseason and everyone’s undefeated.  Everyone except the Rams.  They’ve already made plans for their first pick of the 2011 NFL Draft.  So how did everything really shake out?  Who were the top picks of the TalkingShip Fantasy League? 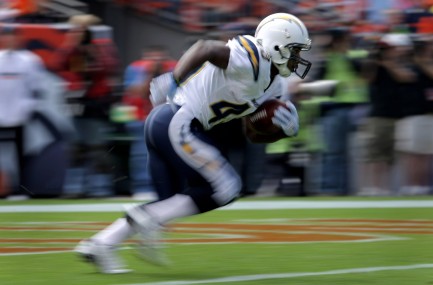 Championships are won with value picks like Darren Sproles in the last round.

5. Terrell Owens (WR, Cincinnati) – Round 8, Pick 9 – The Jitterbugs:  I have Terrell Owens rocketing up my Receiver rankings.  He may have his problems but he has been showing that he definitely has something left in the tank this preseason.  If the Bengals line holds, both Ochocinco and Owens could be in for monster years.  At the end of Round 8, this pick has upside written all over it.

4.  Brent Celek (TE, Philadelphia) – Round 8, Pick 1 – 2 Shipheads 1 Cup: After the initial run on Tight Ends in Round 4, I was wondering when the next one would go.  While others were burning picks that could lock down their Running Backs and Wide Receivers on Tight Ends that were marginally better than Brent Celek, 2 Shipheads got an excellent RB in Pierre Thomas in Round 4 and locked up his TE spot in Round 8.  Great value.

3.  Arian Foster (RB, Houston) – Round 11, Pick 7 – DogsDieInHotCars: Simply put DogsDie picked up a starting NFL Running Back on an underrated offensive team in Round 11 of this draft.  If Foster doesn’t pan out for him, he spent his Round 11 pick on a potential star that didn’t pan out instead of … say … a backup Tight End.  Who would you rather have?

1.  Darren Sproles (RB, San Diego) – Round 18, Pick 3 – HungryHippos: Darren Sproles may end up with the worst stats out of anyone in this list, but he is my pick of the draft.  The Chargers know how talented Sproles is and will work him into the offense.  Worst-case scenario: The Hippos have a spot-starter for their flex spot.  Best-case scenario: Ryan Mathews isn’t the God everyone thinks he is, and the Chargers go back to the sparkplug that has proven it in the past.  Picking up a potential superstar in the last round of the draft is absolutely ridiculous. 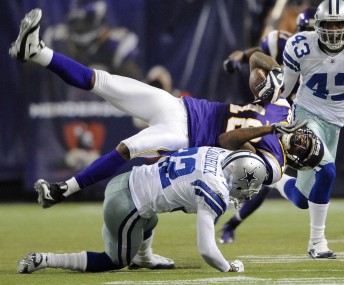 Rule #1: If you're not sure, Google your guy before you click Draft

5.  Garret Hartley (K, New Orleans) – Round 10, Pick 4 – DogsDieInHotCars: The first conscious Kicker Picker.  New Orleans has a great offense that scores a lot of points, but does that translate into a great point total for their kicker, or will he be kicking extra points all day?  The Saints could throw up 35 points and Hartley would only get 5 out of it.  The kicker position is so unstable in the NFL that you should always wait until the last round to pick one. Especially with guys like Carson Palmer, Michael Bush, and Malcolm Floyd still on the board.

4. Owen Daniels (TE, Houston) – Round 6, Pick 8 – Soup Nazis: In Rounds 4 and 5, Dallas Clark, Antonio Gates, and Jermichael Finley were all selected.  Those players are miles ahead of Daniels.  In Round 8, Brent Celek was selected.  He is miles ahead, too.  This looks to me like a panic pick that was made to shore up a position that the Soup Nazis thought would be slim pickings by the time they got another shot at it.

3. San Francisco (DEF) – Round 7, Pick 2 – The Jitterbugs: Luckily Jitterbug saved himself in Round 8 with the Terrell Owens pick, but was the first defense off the board seriously the San Francisco one?  I understand the NFC West sucks.  The 49ers Defense is one of my sleeper picks at the Team Defense position.  But that makes a good pick in Round 11 or 12.  They would be great if they only played the NFC West, but they have to travel to other divisions, too.  The Jets, Vikings, Ravens, and Eagles defenses will almost certainly put up better end-of-year numbers than the 49ers.  And they went in Round 9.

2. Shonn Green (RB, New York Jets) – Round 1, Pick 4 – MV Shipheads: Listen, this guy would have been available for you in Round 2.  Maybe even in Round 3. Maurice Jones-Drew was just waiting for you to pick him.  Shonn Greene is a dynamite Running Back on a great running team.  He has one huge problem: One of the greatest Running Backs in the history of the NFL is on the team, too.  And this isn’t some old, broke-down LaDanian Tomlinson.  LT has looked great in the preseason and has outplayed Shonn Green at every opportunity.

1. Sidney Rice (WR, Minnesota) and Vincent Jackson (WR, San Diego – or somewhere else?) – Round 8 and 12, Pick 2 – The Mariachis: Sorry El, I know this is your first year, call this a hazing.  Sidney Rice is out November due to his recent hip surgery and Vincent Jackson is holding out, and may not play until Week 10 unless he signs with another team.  Bottom line: Find out the latest news before the draft.

I intentionally left my picks out of the list, but I feel like I nailed it on C.J. Spiller in Round 7 and totally swung and missed on Jay Cutler in Round 9.  All in all, a great draft.  Everyone’s team looks better because it was a 10-team league and not a 12-team league, but its the preseason and we’re all undefeated now.  Only the season will tell how these guys will really perform, but based on your preseason reads, who do you think the real winner and loser was in the draft?