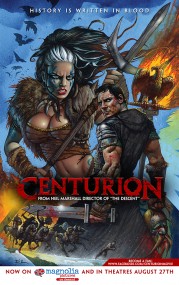 This movie came out of nowhere!  I have long been an avid Dungeons and Dragons dork.  I don’t know what it is about Sword and Sorcery that makes me so giddy, but I’m a sucker for that stuff.  While you have to forget the sorcery in a historical piece like this film, there will be enough swords to fill in the gap.

Centurion is about a group of Roman soldiers that are hiding behind enemy lines after their squad is decimated by a barbarian attack.  Their only goal is to escape alive, despite being hunted by a hot chick with an axe and a thousand nasty brutes.

Centurion stars Michael Fassbender (the thickly accented Brit from Inglorious Basterds) and Olga Kurylenko (the girl in Quantum of Solace) as the huntress chasing the Romans.

The film is currently boasting a paltry 54% on Rotten Tomatoes, but the chief complaint seems to be that it is too gory.  Not a problem in m eyes.  I doubt I’ll be racing to the theater for this one, but it sure will get a quick add to my Netflix Que!