If you aren’t a child of the 80’s, you might not be familiar with this show.  Quantum Leap first aired in March, 1989, and lasted through May 1993.  Scott Bakula played Sam Beckett, a scientist who created a time machine to assist him in going through time to right the mistakes of the past, but something went wrong and Beckett was lost in time.  Beckett would leap into the body of a person that takes part in something that should not have happened.  The viewer is left wondering who or what is controlling the leaps, and each episode was a mystery as to why Beckett leapt into the character focused on in the episode. 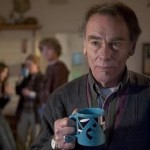 Dean Stockwell played Albert Calavicci, a Navy Admiral that is sent into the past to accompany Beckett, but he appears as a hologram that only Sam can see (and it was eventually discovered that animals, children, and the near-death could see Al as well.)  Al could access the current time’s computer databases and research the people involved in the mystery that Sam was trying to solve.  He would use his odd little PDA instrument, which worked about as well as an iPhone – which is to say, “rarely” – to communicate with a host of other scientists that had helped Sam build the time machine, but were never seen in the show.

When the show wrapped up, the series attempted to explain what the secret behind the mysterious leaping was.  A character was introduced that had appeared in the very first episode, and Sam becomes convinced that this person is God.  He decides that it must have been God that was determining the course of his leaps all along.  When the God character asks Beckett where he wants to leap to next, Sam replies, “Home.”  However, he needed to complete his current mission first, which would help his friend, Al, with a family issue.  As the final show ended and Sam leaped, text appeared on the screen stating, “Dr. Sam Becket never returned home.”  It was not lost on the show’s biggest fans that the text misspelled Sam’s last name by only including one ‘t’.  Was this on purpose?  Maybe we’ll find out soon enough.