Will You Start The Bands, Please!

Friday, 0630HRS; Whenever I go camping I always wake up early and this morning was no different. I probably lay there for an hour then gave up on trying to get back to sleep. Made some coffee, shoved some beans and sausages into my mouth with a slice of bread and more coffee. Wind and rain battered Wigley’s awning as we waited for the rest of the crew to stir. BodsterBug and The Flange were the last to emerge (and did so every morning). All that was left for us to do was to start drinking beer and wait for the arena to open. As I mentioned in Part 1 the opening of the arena was delayed by 2 hours and so, as we could see if people were entering the arena from our position, we waited. Finally the gates opened and we made our way to the arena. It was slow going, mud, oh my God the mud! The walk from the camp was not short and a huge number of fans were making their way to see some of the biggest rock bands in the world.

Music To My Ears.

I'm not a duplication, seriously.

I could hear the music playing as I waited in line, but then I heard something I knew. It was Edge Crusher by Fear Factory! What? They had started before schedule? Now I’m pissed, the first band I wanted to see this weekend and I was missing them. The crowd waiting to enter the arena was not moving. Anger was rising up inside me, but then people started to move, slowly. The pace quickened and I saw why. The path had narrowed which had created a fucking bottleneck. At last I entered the arena swiftly and carefully (fucking mud!) walked closer to the main stage. Sweet, sweet music engulfed me. That awesome kick drum pounding away at my intestines, Dino Cazares grinding out the stomping riffs and Burton C. Bell roaring down the mic. I had managed to catch the last 3 songs of their set and it was enough to make me forget all the shit I had been through earlier on. Replica ended, but I had only just scratched the surface of today’s monstrous line up.

I needed a beer which also meant that I needed cash. The queue for the machine extremely long, so long and slow that I viewed the whole of Terrorvision‘s performance on the second stage from there. The cheesy pop rock had not aged well. It could have been that I was just irritated and not joining in with the rest of the fans, but on more than one occasion I overheard passers by mock their music. A little harsh, yes, but Oblivion did stand out as sounding a little like Mmm Bop. I loved How To Make Friends And Influence People back in the day but it didn’t seem to sit well here, and now.

Now armed with cash I grabbed a beer and headed back towards the main stage. NOFX currently occupied the floor to the delight of thousands of jumping onlookers. I’ve never really listened to this group but I fully understand their pulling power.The energy these guys produce with their punk rock, ska, raggae mix is remarkable, not bad for a band that has been going for about 30 years. I’m sure Wheeler was in his element here as I know he is a big fan and I have a feeling Nerves is too. 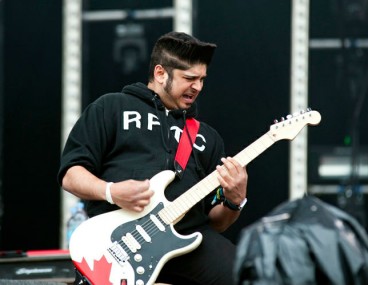 Who swapped my strings for razor wire?!

Billy Talent had a huge task ahead of them and they started with the energy you expect from this four piece. I’m a big fan, from the first moment I heard River Below back in 2005 I found myself pulled into a fresh sounding group of artists. Third song into the introduced us to a new track named Viking Death March, it was Billy Talent through and through, I’m very much looking forward to the next album if the tunes are of this quality. Half way through the set the Canadians took a break to let their fellow countrymen, Cancer Bats, play a song of their own. This was because Cancer Bats were one of the bands cut from the main stage due to the arena conditions. They were however able to move the band onto one of the small stages at the end of the night so they didn’t completely lose out. Afterwards Billy Talent continued on with a faultless performance but I was a little disappointed, the set seemed short and I think the list of songs they played could have been better picked. But as always, they were top class.

Now it was time for something brutal, Machine Head were next. I remember when I had no fear in entering into a suicidal mosh pit back in the 90’s, but I didn’t dare during this performance. Fans had been calling for Machine Head to play at Download for years and now they had their wish. Maybe it was because I had move to another part of the arena but Machine Head seemed to be 5 times louder than Billy Talent. This was proper metal, the modern day Slayer. Listening to this full on metal racket increases your ball size whether you have testicles or not. I just wish they had played something from their debut album from 1994 as that is the only record of theirs I have listened to, and it wasn’t for lack of trying. Korn tore me away from the likes of Pantera and Sepultura, and redirected my focus in music for a long time. But suffice to say I can still enjoy the pureness of Machine Head’s ferociousness that makes them so popular without knowing the music. 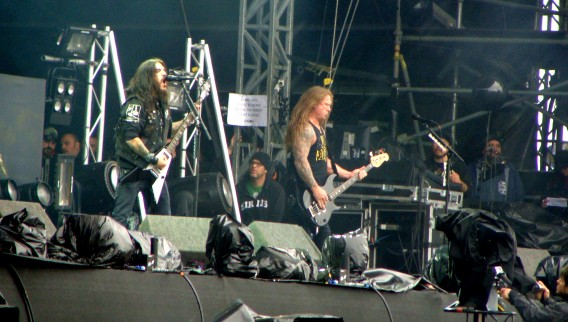 Time to have a wonder around to arena to see what was on offer. Bars, food, tattoo’s, piercing and all kinds of merchandice was out there for the poor old fan that didn’t like money. During my excursion Chase & Status had blundered onto the stage. 3 songs in and my only thought was; what the fuck are these guys doing here? It was slow, uninteresting R n’ B pop music. I’ve thrown a bottle of piss at better music than this. The bad news is that the organisers think they went down well and are likely to take more risks with picking bands in future events. This is not music to my ears I can tell you. 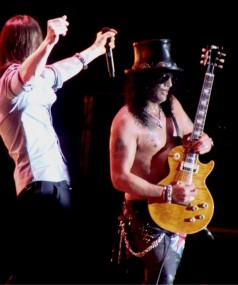 The fish I caught was this big!

2100HRS came and went, The Prodigy were late. The headline act of the day kept me from being pleasured for 30 minutes, but it was worth the wait. Donington exploded and bounced in unison to the heavy bass beats thundering outwards from the humongous  P.A. system. Any second thoughts about seeing Slash instead had instantly been blown away. I saw Slash in 2010 but I had missed The Prodigy in 2009 due to Slipknot being on at the same time. Slash was good back then and I’m sure it was no different this time around. The Prodigy ignited the crowd with Breathe, they disemboweled us with Voodoo People, and Omen made us chirp until our throats were sore. Should The Prodigy even be at Download you ask? I can tell you now that these guys rock harder than a lot of so called metal bands out there. The light show, the live drummer and guitarist, and the massive energy given out by the front men created one of the best shows I’ve ever seen. If you don’t believe me then watch the video I edited together below (watch it anyway), all the footage is from Download 2012. It helps to get in the middle of the chaos of course but still, these guys are gonna be hard to beat.

To be continued in part 3