Yeah, I went to a giant Sausagefest.  There was sausage as far as the eye could see.  And it was awesome.  It was the Redhook Brewery Sausagefest, a celebration of music, sports, beer, and meat. 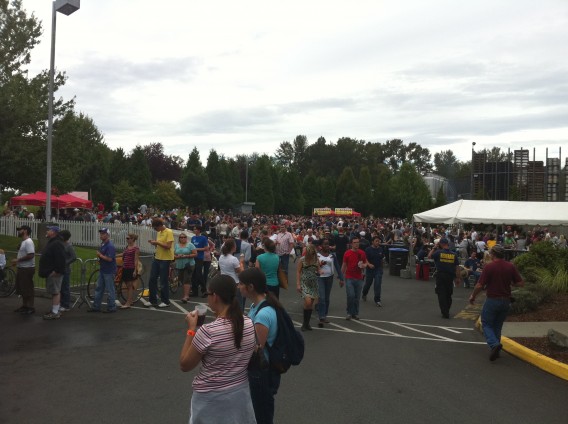 Yeah, it was a Sausagefest, but chicks were allowed, too.

Like all great breweries, Redhook serves good food and doesn't take itself too seriously.

First, a little history about Redhook.  They’re a mid-size brewery that originated in Seattle, and now have breweries in Woodinville, Washington, and Portsmouth, New Hampshire.  They brew and bottle several types of beers, including their flagship beer, an ESB, a blonde ale, and an IPA, among their seasonal offerings.  However, there are a few types of beer you can only get at the brewery, like the Wit Beer.  It immediately reminded me of a light wheat beer, taking the smoothness of a blonde lager and mixing it with the unique taste of a hefeweizen.  It was all I really drank while I was there, as it was my first opportunity.  It struck me as a great beer to drink whileyou’re having dinner, or socializing with friends, or otherwise engaged.  It kept the palate cleansed but didn’t blow me completely away with its taste.  If given the choice of beers to have with dinner, I’d choose this one.  If given the choice of beers to have on their own, I’d probably go with a Widmer Hefeweizen.

The second beer I had the opportunity to try, albeit very briefly, was the Meathook. This was a beer specially brewed for the event, and it was unlike any beer I’ve ever tasted.  It was a dark lager, but what set it apart from everything else was the aftertaste.  If you thought a chocolate aftertaste on a double chocolate stout was unique, if you thought a pumpkin aftertaste was strange on a pumpkin ale, check this out.  The aftertaste for the Meahook was maple bacon.  Yeah, bacon.  And you know what? As strange as it was, it’s not something I’d write off as a total novelty.  It actually went down pretty smoothly.  I didn’t have enough of a shot at this beer to really give a recommendation (not that you’d be able to get your hands on it anyway), but it certainly has me looking forward to next year’s Sausagefest.

I got to hang out with my buddy Mike (you may know him as Ala Douche from Sarcastic Gamer), his girlfriend, friends and family during the Sausagefest.

All in all, the Redhook Sausagefest was a great time and an awesome way to spend a Saturday.  I’m now fully on the bandwagon of trying to get Redhook to bottle and distribute Wit Beer, and I can’t wait for next year’s event.