At E3, Sony made the 3D capabilities of the Playstation 3 and its upcoming games a centerpiece of their presentation.  The promise of 3D is real, you can see it in movies with the spectacle that is Avatar, but most gamers haven’t really experienced it, not as Sony has touted it.  I have.  So I’m here to tell you whether the promise is real or the just a high-priced gimmick.

When I say I’ve experienced Sony’s vision of 3D, I don’t mean I’ve experienced it on a PC.  I recently bought a NVidia 3D Vision Kit for my PC and have been gaming on it for the past couple months.  Let’s get the technical stuff out of the way first.  The 3D that NVidia uses is stereoscopic, which means the monitor needs a 120hz refresh rate so that it can refresh each side of the screen at a separate 60hz rate.  There are only a few monitors that can pull this off on the market today, but luckily NVidia has partnered with these manufacturers to put bundles out on the market at semi-affordable prices.  Also, luckily, I was in the market for a new monitor.  So why not?

First things first: Using the 3D Vision Kit with one monitor isn’t exactly 3D.  It’s more 2.5D.  The bullets aren’t whizzing by your head, the foremost plane is set out from the screen toward the player a bit and everything else is set back.  It’s not as if you’re actually there, but once you get past the fact that nothing will be closer to you than whatever the visual representation of the protagonist is (in the case of a 3rd person shooter, your character) and you look into the background, the depth represented is stunning. The important thing about this technology isn’t the tech specs, though, its how the games perform. The first game I checked out was Resident Evil 5. 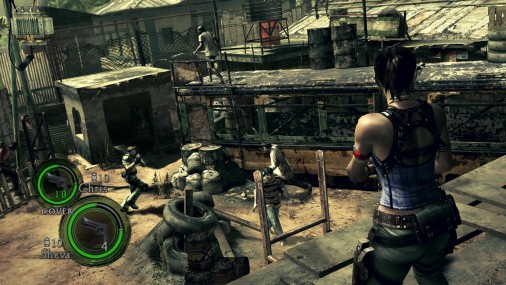 The high-definition backgrounds truly come to life in 3D.

Unfortunately, Resident Evil 5 was panned by people who weren’t fans of the series as not being as good as the monumentally successful Resident Evil 4.  It also suffered from being represented poorly by a bad demo.  Thankfully, the PC version turned out to be the most solid.  In 3D, the act of simply moving through the environment is mindblowing, the backgrounds and the characters in them seem more alive.  If you have a rig that can run it at a high enough resolution with 3D enabled, it an absolute must-play in 3D. 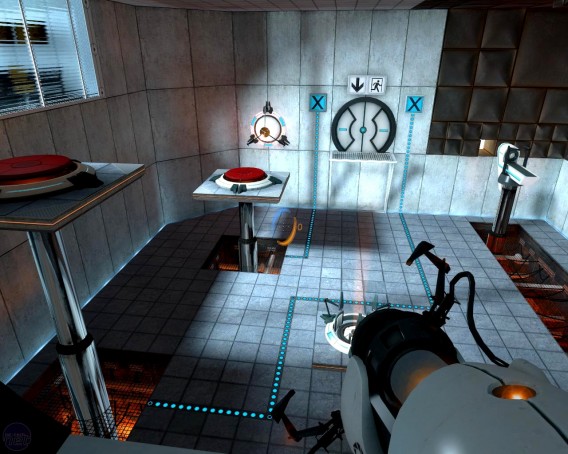 Get ready to get blown away by Portal again in 3D.

The game that really blew me away with 3D enabled was Portal.  In the opening segment of Portal before you have the portal gun, the perspective is skewed and strange, it’s tough to get your mind wrapped around the depth represented in 3D.  Without a focal point for your perspective, you can’t really lock in on anything.  The focal point in Resident Evil was the character itself, and once you get the portal gun, that becomes your focal point. After you get the portal gun you can process the surroundings better and what is supposed to be the background actually starts looking like the background.  The most immersive moments of Portal in 3D are when you are looking through a portal you’ve created through to a different part of the room or level that you’re currently in.  I’ve seen everything that gaming has to offer, and the first time I guided a rocket through a portal, watched it come toward me, and stepped out of the way and let it sail on to its final destination, my jaw was slack.  The effect was incredible.  I played Portal all the way through to conclusion in 3D, and it is the piece of technology that has convinced me that my 3D-enabled PC is my new lead platform for gaming.

A few final questions need answering: How well-supported is 3D currently? The answer to that varies, but I was surprised by the number of games that already have inherent 3D support.  Will this enhance or devalue your gaming skills in online multiplayer?  Tough to know for sure, but I’d say neither.  You’re still playing the same game, looking at it the same way.  Your reactions to what’s happening don’t change, no matter how you’re seeing it.  The most important question: Is 3D here to stay?

In my experience, 3D has been stunning when used with the right games.  With other games, it adds nothing, and even more games don’t currently support it.  Starcraft 2 is one of those games that doesn’t currently have support, but is ripe for it.  Luckily the just-announced 1.1 patch for the game will include the 3D support this game is calling out for.  Still, for the casual PC player, a purchase of this system doesn’t make sense at this point.  There are multiple technical hurdles that must be overcome before you can think about dropping $200 on the 3D kit, including a fast enough graphics card to handle rendering in 3D, a good enough monitor to display in 60hz per side of the screen, and all the other computing power that is necessary to run these elements.  If you don’t have a computer that was purchased or upgraded in the past year, you likely don’t have a strong enough computer to run it.  But NVidia 3D vision has nothing but upside, and I can’t wait to see what games like Civilization V, Portal 2, Bioshock Infinite, and Dragon Age 2 can do with 3D at their disposal.  No score on this review, just a recommendation: If you’re a PC Gamer, have a computer that can run this technology and are only missing the 3D Kit, you owe it to yourself to check it out.