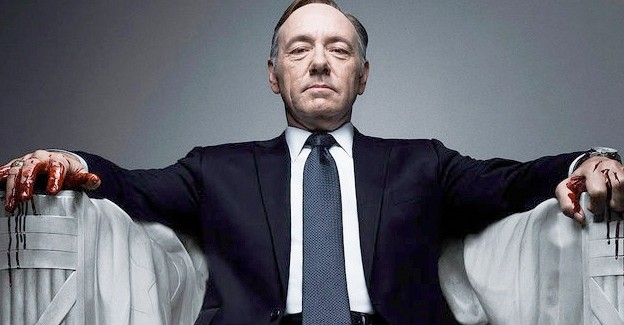 House of Cards is a show defined by polarity. At times, the individually brilliant pieces that constitute it manage to click together and deliver moments of audacious entertainment. Elsewhere, however, the gleaming machinery of plot and character hiding just beneath the program’s stunning acting seems to creak and moan, the respective parts whirring away at varying speeds and directions. The result is an uneven but enthralling mish-mash of high-intensity melodrama and ham-fisted political rhetoric that is best swallowed in one meaty gulp.

If you don’t remember what happened in the first season, don’t worry; the writers are counting on that. The season begins by effectively wiping Frank Underwood’s (Kevin Spacey, American Beauty) slate clean in a shocking plot twist too good to spoil here. However, while it works in the moment, the twist hurts the narrative tension of the show tremendously. Without that particular Sword of Damocles hanging over his head, Underwood’s menagerie of two-dimensional foes have very little leverage to hold over him. Even Raymond Tusk (Gerald McRaney, Deadwood), the first season’s supposedly megalomaniacal mogul-cum-antagonist, offers up little resistance to the unstoppable steamroller that the writers want Underwood to be.

It’s no secret that House of Cards, despite its British pedigree, owes much to previous everyman antihero-fronted dramas like The Sopranos and Breaking Bad. Those shows thrive on rattling their protagonists at every opportunity, forcing them to take a long hard look at their own motivations and actions. House of Cards, however, is much too focused on its own spiralling plotlines to bother dwelling on any of Frank’s misdeeds. What remains is essentially a masculine power trip that refuses to justify itself and excuses its own excesses with lazy cynicism.

These structural problems have plagued the series since its inception, but there are many more bright spots this time around. Whereas last season the supporting players were little more than identical chess pawns for Frank to play with, season 2 marks their graduation into the higher ranks of game pieces. In particular, Frank’s wife Claire (Robin Wright, Princess Bride) and chief of staff Doug Stamper (Michael Kelly, Changeling) transform from henchmen to something resembling actual characters. The show keeps its signature brisk pace and slightly convoluted plot, but, beside Frank’s infallible ability to read people, it manages to minimize the logical leaps that the first season suffered from. In general, the actors seem like they’ve become aware of the show’s penchant for self-parody, and that makes the entire season that much more palatable.

However, while there’s no denying that the show as a whole has gotten better, its script has yet to catch up. The show’s writer, Beau Willimon, has evidently never met a lazy metaphor or cliché he didn’t like. As a result, the script is peppered with groaners, especially during Underwood’s lengthy asides to the audience. Some will excuse them; after all, they are the show’s “thing,” a way it differentiates itself from the (far-superior) dramas it consistently apes. For me, however, the problem is not just with their writing, but the concept of the asides themselves. While they can certainly be entertaining, they’re also a constant reminder that the show’s protagonist is an unsympathetic, vacuous shell whose charm and cunning serve no purpose other than personal power, the most trite of all vapid pursuits. It is, effectively, an interior view of a character that lacks all interiority.

THE SCRIPT IS PEPPERED WITH GROANERS, LAZY METAPHORS AND CLICHÉS

So, is Season 2 of House of Cards going to convert anyone to its cause? Not likely, but that’s probably the show’s aim. Like it or not, House of Cards is never going to be the political take on the Breaking Bad formula that the critics thought it could be. As it stands, Cards is a well-acted, competently-made B-level show that only occasionally yearns to be something more. If you come in with the right expectations, watching it in an enormous binge will probably be enjoyable enough. Just don’t stop to think about it too much, or the illusion will come tumbling down like its own namesake.

New Watch_Dogs Trailer Puts Chicago Into The Palm of Your Hands…

Quinstar’s Beer of the Week or Whatever January 11, 2012 | Quinstar