Painkiller HD... oh I see what you did there!

This ain’t no Sim City…

You’ll have to forgive me for being surprised at this game as I never played those old school FPSs of yesteryear. Doom and the like passed me by- it wasn’t because I was still a twinkle in my father’s ballsack- I just wasn’t into murdering pixels back then, even though I’m sure my 66MHz CPU, 8Mb of RAM, and Voodoo graphics card at the time could handle the game engine. Now that I do occasionally pick up a controller (or mouse) to tickle some zombies with my shaky sniping skills, I can say that Painkiller Hell & Damnation (PKHD) deserves your full attention: this is a fun game. 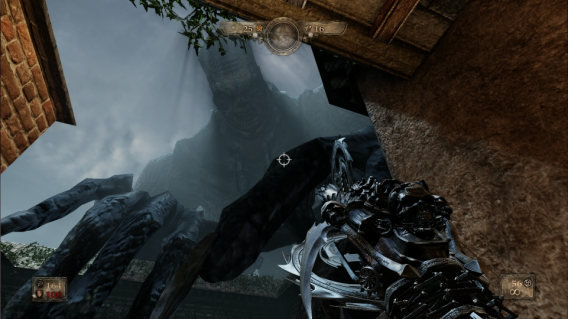 Herman Munster? Have you been at the gamma rays again?

This is a remake of Painkiller and Painkiller: Battle Out Of Hell, which I also never played, and consists of 14 fast paced levels including four boss fights, two player campaign co-op, survival, duel, deathmatch, team deathmatch, and capture the flag. I’ve given up on PvP modes in games – I don’t find them fun anymore, and my bank account can’t take anymore abuse from buying replacement TVs only to become target practice for my airborne controller. But I do like co-op, and so much so I was a little disappointed to find that PKHD has only a two player co-op mode and not four, which would have guaranteed some Left 4 Dead styled manic fun on the harder difficulty settings. Do I dare say that these types of games influenced L4D’s creators? Maybe. The enemies in PKHD do like to run at you, arms flailing, diving in head first into your shotgun rounds. But just to make it clear, I don’t intend to play the PvP modes, only the co-op when the game is officially released, and there are people online to play with. 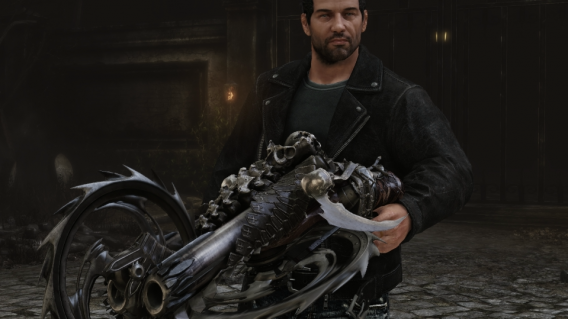 I don't how to... wait, how do I not slice myself with this thing?!

And onto the campaign’s story. Forget it; the opening cinematic looks impressive but god, does the voice acting and script make the BloodRayne movies seem Oscar award worthy. I like to join fellow film freaks in playing drinking games while watching bad movies so I was able to laugh at the comically bad dialogue, and just look forward to playing the game itself. So in short: some dude and his piece of ass die in a car accident, he wants to see her again and so makes a deal with the devil. And that’s it, collect x amount of souls so you can fondle those boobies again.

I had to do a little experiment here at my home. I ran from room to room to see if my vision bobbed up and down as if I was bouncing on a space hopper while high on speed. It didn’t. So why do I feel this way when running around in this game? It’s not so bad when the action starts, but in the moments between hordes of murderous midgets attacking, sea sickness proceeded to consume me. I also frowned at the 2 grunt samples used when you make your character jump. Well it’s one sample alternating in pitch, which I find baffling as they found time to design a large collection of crosshair types for you to choose from. And the music! I was looking forward to moshing in my living room while playing as I’m a heavy metal fan, but it feels as if the same distorted guitar riff is looped over and over again until you’ve annihilated everyone. Only when you’ve reached the next level can you hear the next riff.  Anyway, I do have to take my wig off to the level designs as they are varied, gorgeous to look at, and sometimes vast, which is needed when taking down a 50 foot+ Herman Munster. 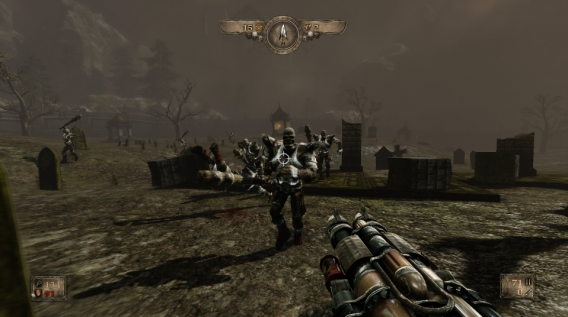 How do you kill the increasingly various enemies in PKHD you ask? Why, with guns of course! And oh my, there is a great arsenal to choose from, no bog standard assault rifles here. As you proceed through the game more and more weapons become available, each equipped with a secondary fire option, even the ol’ faithful boomstick is not standard anymore with its cryo ammo thingy. Even better than that is that you can fire both the primary and secondary triggers at the same time, enabling you to get even more creative with how you dispatch the sword wielding puny skeleton creatures. I particularly liked the gun with explosive rounds complete with a minigun option. One more detail concerning the weaponry: no f****** magazines to reload, hell yeah! Fire rate is dependent on which gun you are using, obviously. I am a little rusty using mouse and keyboard controls so cycling through the weapons with the mouse wheel did frustrate me sometimes, especially when I was surrounded, and I had to run around in a large circle, trailing a conga-line of enemies until I found a suitable firearm. Benny Hill would have been proud.

You can also treasure hunt during the mindless murder-death-kill spree. Anything breakable will offer out a gold coin or two enabling you to spend this hard earned cash on tarot cards which give you added abilities. But first the cards have to be unlocked by achieving goals throughout the level: Find secret areas, find hidden treasures, beat Herman Munster in under 2 minutes, and so on. It did feel like I was playing a LEGO game breaking stuff and collecting the coins, maybe that’s where they should go with the franchise next: LEGO Painkiller: Not Easy to Swallow.

As I said at the beginning; this is a welcome surprise. Solid gameplay, good visuals, multiple modes, a good variety of enemy, and bad dialogue: In Hell there is no such thing as the end of pain. When you think it’s over, the pain just gets worse. Cm’on, how can you not want to play this?!