Is Agent 47 still the Master Assassin, or just another Ezio wannabe?
Hitman: Absolution is a beautiful looking game at times. Especially when it’s raining. The downpour gives the first half of the game’s murky, seedy Chicago setting a distinctive shine; a well needed clean. It pounds down onto the concrete jungle in an aggressive, predatory manner: not unlike Agent 47 himself. The good news is things still look lovely when the sun comes out – a blaze of orange, reflecting off of 47’s shiny, bald head. The bad news is that all of this is merely a pretty coat of paint, which if you chip away at, you find is covering up a rather average, flawed and at times a mess of a game.
It’s been 6 years since we’ve seen a Hitman game, and a lot has changed in that time. The rise of the Uncharted series has seen many developers opting to ape Naughty Dog’s streamlined, cinematic action – delivering big, adrenaline-fueled, linear sequences. Absolution, going against the usual Hitman formula, adopts this technique occasionally throughout the campaign. As a consequence the game doesn’t seem to know whether it wants to be a traditional Hitman game: placing players within a sandbox and giving them a target to dispose of in whichever way their imagination deems best, or a more cinematic action game. The result is an odd mix of the two. Levels are often split up into chunks, tasking you to stealthily enter the location, then loading up a sandbox area for you to take down your target in, be it a strip club or a small, southern town. After that you’re usually challenged with a linear escape, evading cops or guards. The linearity doesn’t really fit the franchise and coupled with the borked disguise mechanic, working your way down a pre-determined path makes for a sometimes painful experience. One mission sees you making your way through a library full of cops who are hunting you down. Now, obviously you can’t just march past them in your trademark suit, so taking out an isolated cop and stealing his threads could be a viable option, yes? Well, no. Suiting up as one of Chicago’s finest will make any other cop who sees you instantly suspicious. Is it really viable that every single cop in Chicago recognizes each other at a glance? Once suspicious, an enemy will follow you, keeping an eye on you. If you let them get too close you could find yourself in trouble. When noticed, trying to casually walk away lead me into more cops who also instantly became suspicious of me. Before I knew it I was leading a band of slightly suspicious cops around a library, and the only option to allow me to progress was to fight my way through them. Not great considering this is a game about a silent, master assassin. So anyone wearing the same clothing as your disguise instantly becomes suspicious, whether it’s a gardner or a cop. It results in a see-through, broken mechanic that is often more hindrance than help. How is it that, if wearing a nightclub staff uniform, the nightclub staff are all suspicious of me, yet the owner of said nightclub seems to have no problems with me masquerading as one of his employees?
The game counters this strange disguise system with its new Instinct Mode. Instead of an all singing, all dancing map of the entire area, pressing the Instinct button gives Agent 47 an Arkham-esque detective mode. This allows 47 to see enemies through walls and predict guard patrols before they happen. It also allows you to temporarily avoid making anyone suspicious. Holding the Instinct button down when disguised causes 47 to cover his face slightly, and regardless of who may be able to see you, you will remain incognito. The issue is it runs out quickly. On the harder difficulties you’ll find yourself running out of Instinct swiftly, so you’ll have to put up with the disguises. On the easier difficulties, you’ll have Instinct in abundance, so levels become a tedious series of walking forwards and holding the Instinct button to cover your face. Although there are four difficulty settings, none of them feel like the perfect balance of challenge and reward, although that does come down to personal preferences. 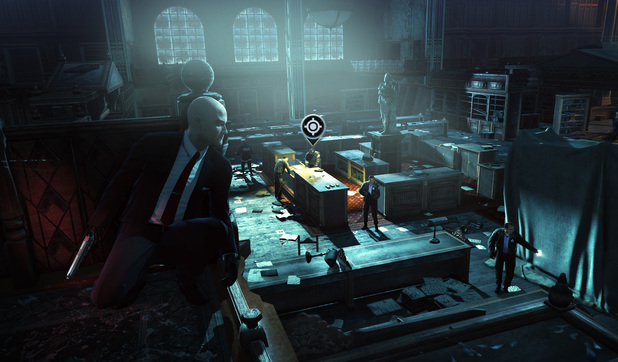 The problem is that, for everything good about the game, there’s a Jekyll and Hyde style anti-feature. The shooting, which is always an option if you’re not the silent type, feels punchy and powerful, however when you aim, 47’s head inexplicably takes up about a third of the screen, making lining up a shot or finding out who’s shooting you (and from where) a laborious process. The world IO has crafted is beautiful and detailed, with countless lines of quality, throwaway dialogue from NPCs that you might not even hear. A lot of effort has been put in, but if you dare play around in the bits the game doesn’t want you to touch, it all falls apart. For example, at the opening of one mission, I walked past a harmless hobo, who’d obviously had a few too many and was hunched on the side of the street mumbling to himself. To see how he’d react I tossed a bottle at him. He immediately stood up straight and, in a voice that wasn’t his own, declared “I’ve found the intruder!” after which he preceded to stand there staring at me. There are good ideas in there, it just feels so half-baked.
The story isn’t going to set the world on fire. After a short meeting with Diana at the start of the game, she leaves him with a request to protect a young girl. 47 goes rogue and ignores the Agency’s demands in favor of helping Diana, and is such thrown into a plot filled with shady characters that need murdering. The cutscenes are well produced, with facial ticks noticeable and animations looking lovely, and it’s obvious that effort has gone into bringing a cinematic experience to the game. One nice idea that the game brings to the table is its Contracts mode. The game’s online mode allows you to create levels for other players to have a crack at. The twist is, to create a level, you need to play it. If you choose to kill a certain person with a bottle whilst wearing a chefs outfit and remaining unseen, other players will have to meet those criteria and kill that specific person in that specific way if they want to reap the maximum rewards. It’s a smart idea and it potentially adds huge value to the game in the sense that there is a huge choice of user created challenges to try and beat. Of course, you will still have to deal with the same issues the campaign throws up, so it will depend on how much you enjoyed that.
Hitman: Absolution isn’t a dreadful game. At times, it shows signs of brilliance: when you’ve studied a patrol route and set up the perfect trap, casually walking away from a corpse that could seemingly have only ended up that way due to a tragic accident, it’s thrilling. Unfortunately these moments are few and far between, and for the most part it’s more of a chore than a game. It’s a constant battle against wonky mechanics that’ll have you wanting to throw your pad across the room for all the wrong reasons. Not the master assassin we were promised, but there’s no reason to order a hit on it just yet.

– A step back for the franchise due to the introduction of half-baked ideas.