Rayman Legends, New Super Mario Bros. U, Nintendo Land and ZombiU: does the Wii U have a good launch lineup on its hands? The Wii U at last weekend’s Eurogamer Expo had an astounding presence, with tons of games available to play. Whilst our opinions on the hardware can be found here, this article is all about the wonderful games Nintendo had to show. 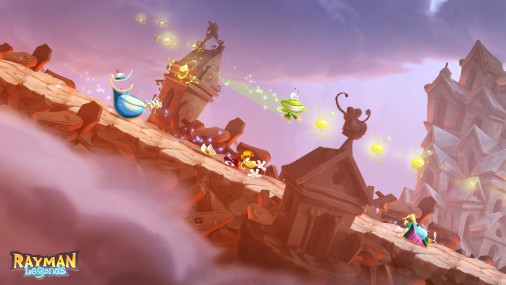 First off was Ubisoft’s Rayman Legends. This game was absolutely fantastic, and I truly loved it. It was 2 player co-op, with one person using the Pro Controller, and someone else using the tablet. I managed to play with the tablet, and it was a really great experience. I was controlling a flying green frog (whose name escapes me), and the other person was controlling Rayman himself through simple platforming. As the person with the touch screen, I had to help Rayman make his way through the level. This involved cutting down ropes so he could cross a gap, hitting dragons with a catapult to stop them from killing him, and even controlling a maze with the accelerometer to guide him through it. The key word at Nintendo’s E3 conference was ‘asynchronous multiplayer’, and I’ll admit that I was skeptical before. But I am now completely sold. With two players doing completely different things, the whole multiplayer dynamic changes completely, and the emphasis on teamwork and communication is fantastic.

Better yet, the game is really fun to play. It’s also graphically gorgeous, with the same wonderful aesthetics as Origins (which is definitely a good thing!). It controls very well on the touchscreen, with all the actions clearly thought out and perfected for the tablet. And, most importantly of all, it’s still the same in terms of having awesome environments, cool challenges, and that perfected platforming style. There’s nothing quite like me sliding my finger over Lums, watching Rayman glide through them, earning double points, before killing the enemies in front of him. It’s a truly great game, and has single handedly sold me on a Wii U.

If Rayman’s not your cup of tea, fear not! There was also a familiar face: New Super Mario Bros. U. Unfortunately, this one was more disappointing. We played four player co-op, with all of us using Wii remotes, and the booth attendant using the tablet. The game was ridiculously hectic and fun, but it didn’t seem to do anything new. The main thing was that it was in glorious HD on a very large TV: and that is a satisfying feeling. The person with the tablet was doing something, but it wasn’t entirely clear what: I think he was placing down power up blocks and platforms to help us. Don’t get me wrong, the game was fun, but I’m getting a bit fed up with the lack of innovation at Nintendo when it comes to its core titles. Which is odd, considering the completely new game Nintendo has made with Nintendo Land: a lovely little game. It’s basically a mini game collection, of which I played two games and watched one. Conveniently for Nintendo, the mini games are actually rather fun. The first one I played was Luigi’s Ghost Mansion, based on…Luigi’s Mansion. I had the honour of using the tablet controller, and was thus controlling a ghost which I had to move around the mansion, catching and killing the other players (although I’m sure Nintendo will find a more family friendly verb). The other players had to avoid being caught, and had to kill me with their flashlights. The catch? They couldn’t see me: they could only feel their Wii remotes vibrate when I was near. For me, the game was easy. I just moved around with the joysticks, sneaking up on players from behind and running away when they turned their flashlight on me. It was still fun for me, even though I was a bit overpowered: I like to win! For the other players, it was more challenging, although this could be because of the lack of communication thanks to being in a very loud booth. Either way, we all had fun, although it might help for Nintendo to fix these small balancing issues.

The next mini-game was based on Animal Crossing. We had to wander around a theme park, taking candy from trees by standing under them, whilst avoiding the guards (controlled by the person with the tablet). Once again, the remote players had to focus on teamwork: to get candies, two or even three people had to stand under the same tree. And once again, this proved challenging, but I can imagine it being both more fun and more fair in a normal environment, playing with friends.

So far, it might seem like all the Wii U games are kid-friendly. But (fortunately) that’s not the case. ZombiU is the game that’s leading the charge on Nintendo’s mission to own a competitive roster of 3rd party titles. A Wii U exclusive developed by Ubisoft, it sees London invaded by the undead – and it definitely takes advantage of the Wii U’s unique controller. In the preview code I played, it certainly nails the atmosphere of an undead apocalypse. 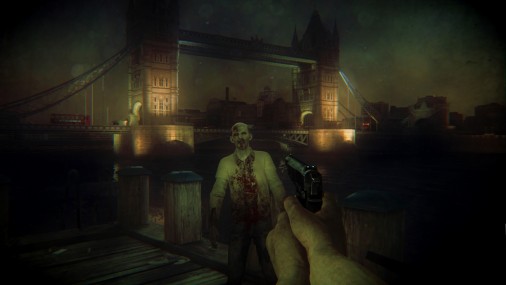 One of ZombiU’s quirks is its permanent death system. There is no main playable character per se and you start off as a random person waking up in a bunker. You’re supplied with their name, age and occupation. You have a backpack which you store all of your equipment in such as guns, ammo, health packs and lastly, a ’scanner’, more on which later. So, backpack full, you’re all ready to set off on your merry travels through a particularly bitey London. If you do happen to succumb to a member of the undead (which you will, eventually) then that’s it. Game over. Dead. Kaput.

It’s then that you wake up in a bunker as a completely different person; the only difference being, you don’t have a backpack or a scanner. To retrieve your valuable possessions, you must find your former character – who by now is a rotting, hungry deadhead – and kill them, after which you can loot their body and reclaim your goodies. It’s a nice idea, and it adds a layer of tension to the zombie genre that is long overdue. In practice, however, it seems like it could quite easily become a bit of a pain in the ass. In the level I played, spawning back at the bunker just meant I had to run through the (now clear) level until I found myself (not in a self-discovery sense; more a “DIE OLD ME!” way). Hopefully this will be made more interesting by the time the game hits shelves.

The Wii U gamepad is vital to the experience. The much touted “asynchronous gameplay” is in full effect here, with the gamepad serving as your live inventory. Smartly, to manage your kit you need to look away from the TV and focus on your gamepad screen. The game doesn’t pause when you’re fishing through your stuff, so you need to rely on your ears, listening out for any suspicious noises that could indicate that imminent death is well on its way. The scanner also makes use of the gamepad, requiring you to scan the TV by holding the gamepad up to the screen and moving it across accordingly; here you can scan objects of note and tag unsuspecting zombies to keep an eye on them. The same mechanic is implemented with scope based aiming, which in all honesty is unnecessary and rather clunky. There is no reason to modify the normal aiming system the game uses for pistols and the like, and having to hold the gamepad up to the screen every time you want to use your sniper-rifle or crossbow is irritating.

It’s the controls as a whole that seem to be letting Zombi U down. Using a cricket bat (a staple weapon in any hardcore zombie fan’s arsenal) is infuriating at points due to the fact you have to aim and then hit. It would feel a lot more natural to have a one button press to swing your bat, and unfortunately this strange control scheme sucks some of the fun from the game. The sticks feel unpredictable and, unlike the smooth, precise control of a DualShock or a 360 controller, it’s easy to find yourself overshooting your aim, or moving your character bit by bit to ensure you remain on track.

Small niggles aside, ZombiU is looking to be an exciting launch title for the Wii U: one that makes use of the console’s innovative controller in ways that fit the atmosphere of the game nicely. If all goes well, it could be the game that pulls the adult audience back towards Nintendo.

Out of the games we played, we were very impressed. The Wii U has a strong launch lineup, made up of much more than these games, and the hardware is very good. The tablet is definitely not a gimmick, and it makes a fundamental change to the multiplayer of games – but the developers have to implement it properly. From my point of view, the only limiting factors to the successfulness of the Wii U are the price point, the marketing, and the online features – which we remain skeptical about, as we didn’t see any of the Wii U’s operating system whilst at their booth. Nevertheless, if you do buy a Wii U we can’t imagine you being disappointed with the launch lineup. In fact, it might well be the best launch lineup of recent times.