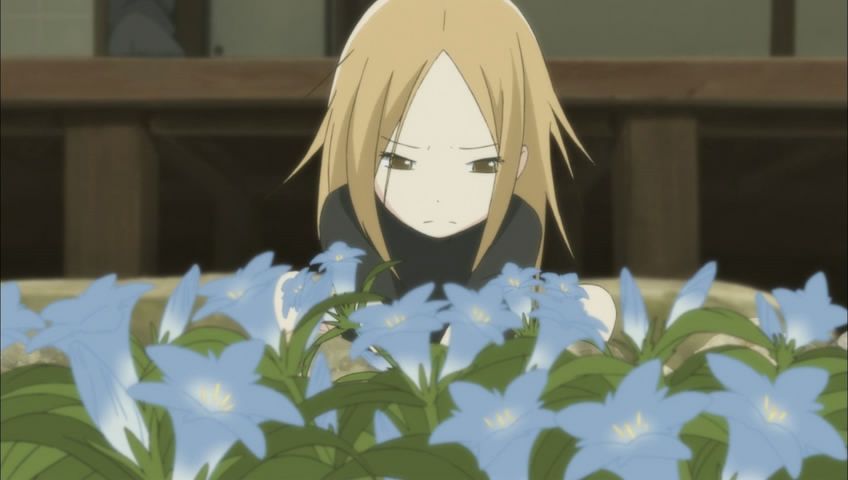 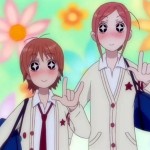 I’ve always loved animation. From the classic Warner Brothers five minute giggle fests to the wondrous ‘Sword in the Stone’ and ‘Robin Hood’ by Disney. It wasn’t until earlier this year that I started to delve deep into the world of Japanese anime. I had seen and marvelled at ‘Dragonball Z’ and  ‘Tenchi Muyo!’ some years ago and I was left wanting more. So off I went, searching and sifting through the mass database of anime titles. Then the endless hours of watching began. With my eyes bloodshot and buttocks sore, I realized that I was addicted. The beautiful ‘Ah! My Goddess’ and  ‘Lovely Complex’ (I could write a whole article on this anime) to the disturbing ‘School Days’ and graphic ‘Elfen Lied’, it was all miles above in quality compared to the hum drum bullshit that was coming out of Hollywood. The Japanese are twisted (no offense intended) and are not afraid to show it, and this makes for great storytelling or at least something different. Now I don’t consider myself an expert on anime and I’ve not seen all that has been released in 2011 so feel free to comment and give suggestions on any anime that that I’ve missed and I’ll add it to my long, long list of anime to watch. With that said, here are my favourite three animes from 2011.

This will be difficult for me to write since I am a man, a man that most of the time shows no emotion what so ever. Then ‘Usagi Drop’ came along and force fed me stories that blew my mind. Not since the brilliant ‘Wall-e’ graced our screens have my eyes watered up so easily and without an onion in sight. ‘Ah! My Goddess’ and ‘Lovely Complex’ made me feel like an emotional blubbering fool and ‘Usagi Drop’ then came along and did it to me more than the others combined.

The story follows a 30 year old single man named Daikichi Kawachi, whose grandfather has just kicked the bucket. On his arrival to his grandfather’s wake he meets a 6 year old girl named Rin and is surprised to find out that Rin is his grandfather’s illegitimate daughter which makes Rin, Daikichi’s aunt (still with me?). With no mother around to raise the child, Daikichi takes it upon himself to look after Rin (after the rest of the family have already discussed the matter and can’t be bothered with the poor girl).

We follow Daikichi’s struggle and learning process on how to cope with being a single parent from simple tasks such as shopping for clothes to more complex problems like helping Rin emotionally with the loss of her father. It then continues on with Daikichi making a difficult career decision that enables him to spend more time with Rin and a new relationship is developed when Rin starts kindergarten and meets a boy named Kouki. Kouki is your typical mischievous, pain in the ass, troubled child with a hot mama. As I progress through the story I did wonder if any romantic plot would surface but no, it’s never explored. But this is not a bad thing, at the end you are wanting more and I’m pretty certain more episodes will be produced. Later on Daikichi does find Rin’s mother and confronts her, but she is a manga artist with no spare time, is barely an adult herself (you sly dog gramps) and has no interest in raising Rin. 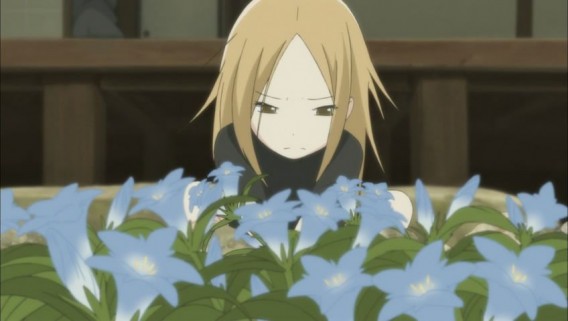 Episode 1: The story immediately grabs you by the heart and tries to pull it out via your eye sockets.

The relationship and chemistry between the two main characters, the new relationships which are formed with others and subtle comedy will keep you smiling and entertained. All this is delivered in a total of 11 episodes (around 25 minutes each) and every frame on screen is a delightful piece of water-coloured art which fits the mood perfectly. All too often have I watched an anime and stopped watching because the character designs have been lazy, computer generated, cloned models. There’s none of that here. Everything looks hand-drawn which gives the series personality and charm. Keep an eye out for Rin’s facial expressions, especially in  episode two when we are treated to what I call the ‘Charlie Brown frown’ and don’t miss out on one last amusing scene after the ending credits on every episode (no one told me about this so it was a nice little surprise).

Also the music score is beautifully crafted, delivering heart wrenching orchestra and skip along piano melodies for the fun parts. It’s also rare to hear a decent opening and closing credit songs in anime and yet again ‘Usagi Drop’ doesn’t disappoint. So sit back, relax and enjoy the heart-warming tail of Daikichi and Rin. (I need to go and do something manly for a while. Maybe I’ll fix an engine or something).

Kore wa Zombie Desu ka (Is this a Zombie?) 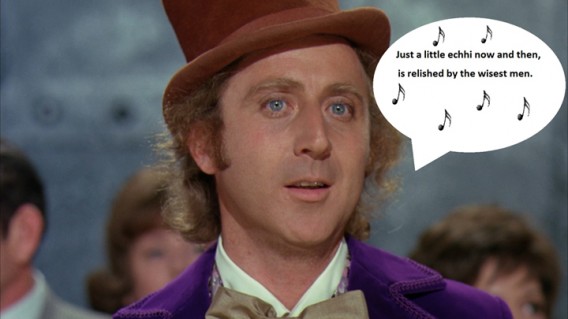 Hey! This is an anime article, dickhead!

Ayumu Aikawa is a zombie but not a zombie that we’re all used to seeing. He looks like your typical high school teenage boy. After being murdered by a serial killer a mute Necromancer named Eucliwood Hellsythe revives Ayumu and moves into his house. While Ayumu relaxes in the local cemetery a mysterious girl shows up (Haruna) and all hell breaks loose while she tries to defeat a demonic monster, the first of many. Somehow during this mayhem Ayumu takes procession of Haruna’s magical powers and now has the added ability to transform in to a Magical Girl (not sure his gender actually changes) with a chainsaw. 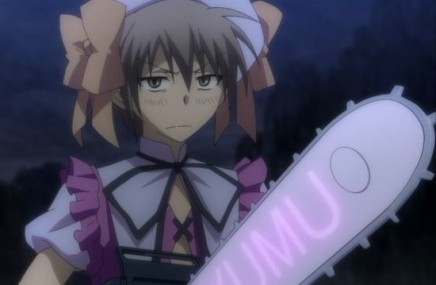 The often naked Haruna also decides to move in with Ayumu but there is another surprise. Enter the big breasted, ninja-vampire, Seraphim who shows nothing but contempt for Ayumu. Now with three girls living with him the plot gets moving. Ayumu is determined to catch the person responsible for killing him which turns out not to be so easy. Another plotline is revealed which carries you to the last episode (twelve total), but I won’t spoil it here.

Don’t expect too much plot-wise from this anime because this is more of a parody, almost a ‘Spaceballs’ type of entertainment, but not quite so obvious. Visually this anime is nothing special but is flawlessly animated with the bonus of a good soundtrack. The opening credit song should get your toes tapping if you’re a rocker like me. So if you want a laugh, a giggle, and a slice of guilty pleasure you’re in for a treat. The fact that when Ayumu transforms into a Magical Girl and raises his powers, making the dress that he’s wearing even more ‘cute’ had me rolling on the floor. If you’ve seen your fair share of Ecchi’s panty shot  perverted silliness and can’t take anymore, look elsewhere, there’s no deep meaningful story going on here. 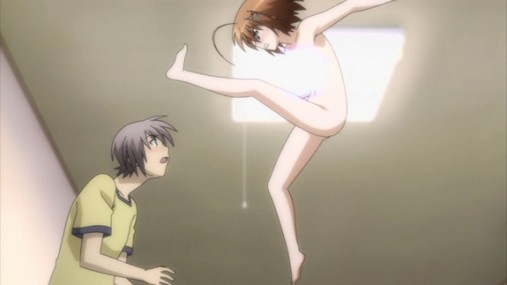 Its sooo wrong but I can’t look away! 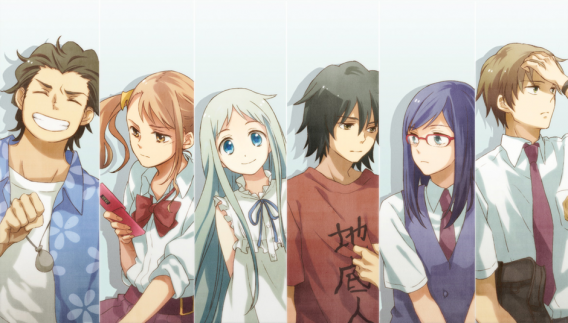 And so we arrive at my last recommendation and the most dramatic of the three. The story revolves around Jintan and his childhood friends. One of his friends, Menma, died in a tragic accident and we join the story some years later after the group have grown apart. They are gradually reunited but the playfulness of their childhood has all but disappeared leaving the air thick with tension and the fact that Jintan can now see the ghost of Menma adds to this. It seems that Menma has a wish that needs to be fulfilled to move on but has no idea what that wish could be. Thankfully this story arc is left on the back burner and concentrates on the conflicts and relationships between the characters. More often than not, I like to delve into an anime with as little information as possible. I like to be kept in the dark so any little plot twists and surprises are not spoiled. So this is as much as I want to say about the plot on this anime. The script is well written, each character is interesting and the voice acting is superb. Like ‘Usagi Drop’ the music score adds to the mood where appropriate making use of piano, classical guitar and orchestra. Visually again I’d have to say it’s above par using vivid colours you’d expect to see with a lot of scenes taking place at dusk and dawn, thereby enhancing the mood. The only little complaint I had with this show was that it sometimes tried too hard to pull at your heartstrings but after the brutal onslaught of tears you are exposed to by the end, you feel satisfied that there is nothing more this anime can throw at you. You don’t want more, you can’t handle more, the point has been tearfully made and you can happily move on.

After finishing this dramatic story you are reminded once again that we as human beings struggle to cope with the death of our loved ones and must rely on friends and family to find peace. We are after all emotional creatures and I hope that never changes.

Again, these are just my three favourite Animes of 2011. I fully recommend you, at least, check out the first few episodes and let me know what you think. Happy watching.