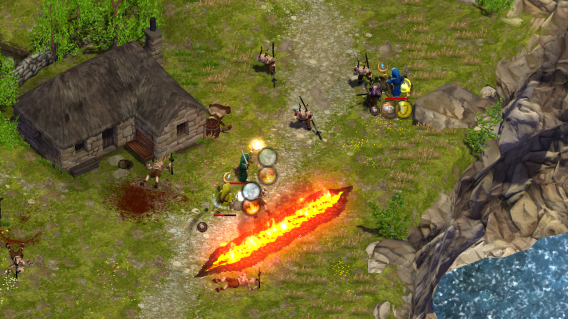 Magicka is a funny and ambitious game from Arrowhead Games

You may have heard us discussing Arrowhead Games’ wildly successful quirky adventure game, Magicka, on the recent podcasts.  I got the chance to have a question and answer session with Patrik Lasota from Arrowhead Games.

Talkingship: Thanks for doing this session with us, Patrik! Can you describe your role on the team?

Patrik Lasota: I am officially the PR and Community manager, but in a small company like this, you inevitably end up doing what needs doing, so there has been a lot of other work as well.

TS: Are you a beer-drinker, and if so, do you have a favorite brewery or type of beer that you can get locally?

PL: There isn’t really any local microbrewery around here, but I do have some rather odd favourites. My absolute favourite beer would be Mardesous nr8, a dark Belgian monastery ale.

TS: What team were you rooting for in last years World Cup?

PL: The wizards, they always win…or blow themselves up!

TS: What type of game is Magicka?

PL: It is an action/adventure game where you combine elements to create spells of epic proportions, and epic failures.

TS: What is the core mechanic that separates Magicka from other isometric adventure games?

PL: Spell casting. That is actually the basis for the entire game and why it came to be. The idea was that we wanted to portray spell casting in a way that you would imagine a wizard casting spells. Hand movements and combining elements to create different spells.

TS: Generally adventure games focus on a wide variety of class choices, including melee, ranged, and magic users – why the focus on the magic user in this one?

TS: Co-operative multiplayer is a big focus in Magicka. What was your expectation of how this would be received?

PL: We hoped it would be well liked. The cooperative community has always been large, Sven Coop comes to mind as an example. The reception we did receive was awesome, it really feels like we did a good job.

TS: Have you seen any videos or heard any stories that you weren’t expecting about people’s experience with co-op?

PL: The sequence breaking that two guys did to get the book containing teleport early in the game comes to mind. They used mines and shields to blow themselves up there and actually got the book. It was a good laugh at the office

TS: Let’s talk about the game’s origins.  Like another one of Talkingship’s favorite games, Portal, this one started as a student project.  Can you talk a little about the transition from a student project to a fully-developed retail game?

PL: It was a big step, actually saying “lets do this game full time”. In the beginning we were just privately founded, and sat on our own computers developing Magicka. We learned a lot from that early time as well. You can say that we learned more in the 3 first months of development than we did in 3 years of school.

TS: Were any features added/removed in the transition phase between student project and retail game, or were all of the core elements in place when this was presented as a student project?

PL: The Magicka then was in 2D and had a lot more complex way of making spells, where every spell was a representation of a hand movement. When we decided that we would make the game full time, we basically said, lets redo it in 3D. Also, there are always things that doesn’t make it to the full game, at some point you have to say “We don’t have time to do this.”.

TS: Where does the humor in the game come from?

PL: I like to say that its the kind of humour that shows itself when you reach critical nerd mass. It is however a really popular form of humour, if you look at the Internet today, many of the jokes are actually references to something else.

TS: Are you familiar with Jim Hensen’s Muppets? If so, who is your favorite Muppet?

TS: Magicka had a very interesting release in the United States, the game was feverishly being patched but still had to be considered a wild success, selling over 30,000 copies over it’s first 24 hours.  What was the mood in the offices like during that launch window?

PL: Happy, awesome and stressful. When we saw the amount of bugs we had at release we made the decision to patch the game every day for the first 2 weeks, and it took its toll on us. We did 11 hour workdays, every day, even weekends. You just can’t keep up that tempo forever, but in hindsight I’m happy that we made that commitment, and I’m happy that we managed to solve so many bugs. The game still needs patching though and we are working on it, but at a normal pace.

TS: Have you ever been to the United States? If so, did your accent help you to meet any women?

PL: People have a tendency to hand you a frying pan and suggest that you make them Swedish meatballs. Also, people look strangely at you when you say anything other than “bork”.

TS: What’s next for Arrowhead?

PL: We are for now working on patching Magicka and creating DLC. And of course blowing each other up with crazy magicks!

As you can tell, we’re very fond of Magicka over here on the ship, and look forward to concocting some crazy shenanigans inside the world that Arrowhead Games has created.

NGP vs 3DS (A British Tale)