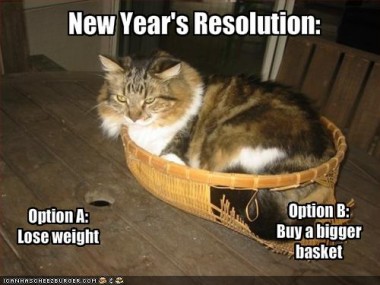 As we count down to midnight on New Years Eve, we take the time now to look back on the year that was, and as we stare in wonder at what has come to pass, we look forward to what the future will bring. And as always, the one thing that comes with the dawning of a New Year, is a resolution. You resolve yourself to try something that scares you, resolve to lose weight by exercising more, and resolve to try and get on with your mother-in-law a bit better (on second thought, scratch that last one. She’s probably an evil harpy who has been trying unsuccessfully for years to destroy you).

But lets face it, we’re gamers, and as gamers, we should be setting our sites on more gaming orientated resolutions.

5 – Resolve to HELP the noobs, instead of pwning them:
So, we’ve all been there. We’ve happened upon a noob, standing in one place, with his back to us… just standing there, watching, waiting, not even realizing that his death is at hand. What’s the first thing that pops to mind? “Shoot Him!” Now normally, you would, but for this year, you’ve resolved to help them learn from their mistakes, by giving them little hints here and there. Standing behind him? Shoot him in the leg with a pistol. Not a death-dealing shot, but enough to let him know that he should be more aware of his surroundings. See, you’ve given him a tip that will help him… NEXT time around. Because this time around, after the realization has seeped in of exactly what is about to happen, death welcomes him into it’s embrace. Don’t you feel good? 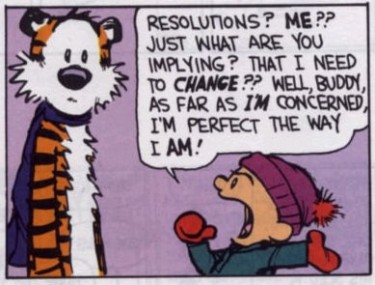 4 – Try a Game that You’d never normally play:
So, you’re a First Person Shooter person (Redundant?). You love nothing more than running through a linear environment while holding a gun in front of you, and looking at the world from where your chest should be. Why not try something different this year. How about paying Blizzard $15 a month to play WoW. That’s right, this year, your not going to be pwning ass like you have been with CoD. Instead, your going to be traipsing through the wilds of Azeroth, grinding away for hours on end so you can collect that 100th elk’s horn, so you can be rewarded with the ‘Sugar Cane Lightsabre of Slight Pain and Indifference‘, meet up with a guild of basement dwellers with no social interaction skills outside of organizing the party to slay Lord Kazzak, all in a game that will NEVER EVER END, which WILL keep you up late at night, causing you to lose  your job, your wife, your car, AND will also incite the dog to bite you… Aren’t you glad you resolved to try this damn game?

3 – After this level, I really WILL go to bed:
I think we’ve all experienced this at least once, haven’t we? It’s midnight. Your due to get up and go to work in about 3 hours. Your nearly at the end of the level, and you promise to yourself that after this level, you are really, definitely, absolutely going to go to sleep… then you finish the level, see there’s something even more awesome in the next level, and start making that promise allllllll over again. Just say no. Go to bed, you’ll feel better for it, which will make you look better, which will get you a date for once, and which will release you from this hell that is video games… FOR THE LOVE OF GOD, GET OUT WHILE YOU STILL HAVE YOUR YOUTH!!!!!!!!

2 – Stop searching the internet for cheats:
So… you’ve hit a wall. After you recovered from the concussion, you stand up, wonder why you were hitting your head on a wall, and go back to playing your game. As soon as you start playing again, you realize why you were inflicting your head upon that defenseless wall… your stuck. You have no clue where to go, and your probably not even in the right area to begin with. So what do you do? You get to a FAQ! Well, no more I say. From now on, no matter how annoying it is, no matter how long it may take, no matter how much you bleed from your eyes from the stress and the strain, you shall resolve to not cheat ever again! You shall follow the straight and virtuous path to completion, and you shall be a better person for… albeit you’ll probably be suffering brain damage, but goddamn it, you completed something all by yourself, and that makes you damn special!

1 – Resolve to Play with your Wii again: 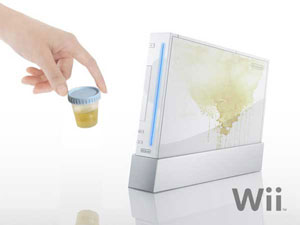 You’ll take the console down off the shelf, blow the dust off, plug it into your TV, turn it on… and then wonder why you ever resolved  to play this damn thing again?

So, there you have it. My Top 5 gaming resolutions. Do you have any more to add? Just pop them into the comments section below.

But anyway guys, I hope you all have a Merry Christmas, a Happy New Year, and that you all resolve to be different.  I’ll catch ya on  the flip side! This is MuttonChop, signing off from the land down under!

Has this happened to you?