Greetings Shipheads. From the land down under, it is I, Muttonchop. Feeling refreshed and full of vigor, I’m here to give you my take on the Oculus Rift, as off track and rambling as it may be! Bear with me: it’ll be worth it. 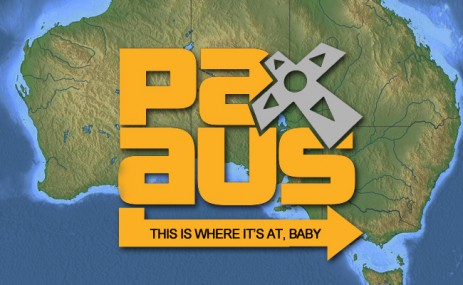 Before I begin, I need to point out that any opinion I have is formed from my time using one of the earlier dev kits provided to developers. There was a booth set up specifically for showcasing the latest build of Oculus, but unfortunately due to time constraints and the fact it was hidden away in a corner of the convention centre, I didn’t get a chance to get in early and have a hands on with it before the lines got ridiculously long. I also need to point out that I am a shit reviewer. I have a hard enough time explaining directions to someone in an area I know, so if I ramble or get sidetracked, bear with me.

But enough of that, on with the preview!

We experienced Oculus with Lunar Flight, a lunar lander game in which, at least in the demo, you were tasked with taking off and landing at various points on the moon’s surface. For the Oculus Rift demo, you didn’t have control of the lander at all. It was an on-rails demo flying you from point A to point B. You could, however, look around the cabin. The first thing I noticed was the low resolution. I could see the red/green/blue of the individual pixels if I looked closely enough. To be fair, if I was actually playing the game and  dealing with everything it takes to keep the lander in one piece, I probably wouldn’t have noticed it as much. I was assured though that the screen resolution was one of the major upgrades for the latest version of Oculus. 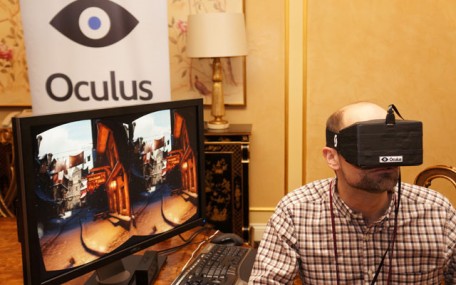 The next thing I noticed was that my head movement in correlation to head movement in game was 1 to 1. There was a small gap between the headset and the bridge of my nose which I used to my advantage to see what the perspective was like. In the game, your character does actually have a body and when I looked at my character’s chest, I was looking through the gap and noticed the orientation was spot on: I was looking at the exact same spot on my chest. The same went for when I checked the positioning of both shoulders, so whatever gyroscopic system they are using to sense the position of the headset is perfect, even in such an early build of the system. One extra thing I should point out in relation to the precise head movement was its use for accessing the systems in the lander. As you look around, when you look at something that you can access, a small arrow comes up beside it, at which point you could press a button and access that system. The headset was also extremely precise. I’ve seen with some of the older VR units, if you had your head focused on one spot, even if you kept your head perfectly still, the image would still twitch, jump and move around a tiny bit, which could still be enough to throw your aim off what you’re trying to shoot or access. That’s not something that’s a problem with Oculus.

I’d also like to mention the 3D depth in the glasses, and the game. For example, while sitting there, I actually tilted my head/body to the left and right to see if the head position was fixed. It isn’t. There was a view screen at the top/centre above the main viewing point, and I was curious if I could look around it. I could. As I tilted to the left and right, I could actually look behind the roof mounted monitor and see a section of the lander’s canopy which would have otherwise been blocked from view if it was a fixed viewpoint. There are so many different and interesting ways that this could be applied if the system is actually capable of detecting your movements along all three axes. I could imagine it would be a bit more of a headache for developers though, having to create an environment which would include areas that you may not ever need to model for in a standard game as there isn’t a chance that the player would ever normally see it.

Some of the concerns that have been spoken about many times over is how it will affect people who wear glasses, as you definitely cannot wear them whilst wearing the headset. Never fear, the developers have heard your concerns. The screens/lenses can be manually adjusted/focused by players who may not have the best eyesight, which was demonstrated to me when a large portion of those gamers who wore glasses were able to slip on the headset with no worries. There were still those who had problems adjusting, but hopefully this is something that will be fixed in later builds of Oculus.

One of the things I didn’t like was the motion blurring. Move your head too fast and the image just became one big headache inducing blur. Slow movements were the key to a reasonably clear image, although there was still a certain level of fuzziness to the picture even when you weren’t moving your head much, if at all. This could be an issue if you’re in a life or death situation where quick precise movements are the difference between victory or defeat. In the time it takes for me to hold my head still and wait for the image to clean up, I’m already dead. Once again, this should hopefully be something that improves with later builds, both through the resolution of the screen, and improvement of the imaging software for the unit.

Overall, I like what I saw, and I see the potential for the future. If the newer builds of Oculus Rift can fix the problems with the headset as I saw them, then the future looks very bright indeed for virtual reality. If they can do it at the price I’ve heard ($300 to $400), even better. If I had to give this a tentative score, I’d say 3 out of 5 Ships, based on this iteration of the hardware.

Below is a video from Lunar Flight with the dual screen perspective of Oculus Rift. Have a watch – it shows a little of how the OR is calibrated, as well as the practical implementation in game.

The Novelist: An Interview with Kent Hudson 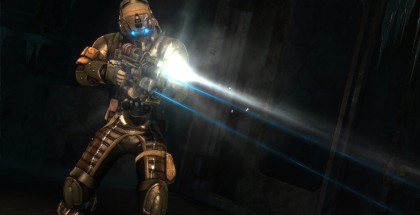