For Laughs
No Comments

Are you having too much sex? Are you inundated with offers from beautiful women/men wherever you go? Do you need some form of repellant that fends off the lustful masses so you can jerk off and watch Firefly again in peace?

Fun stereotypes aside, comics are awesome, so I figured I’d do a little column about a few books I’ve been reading this week that I think the rest of you may enjoy should you be inclined to dabble in the funny-books. I might make it a weekly thing but let’s see how this goes.

This came out a few weeks back and is being billed as “Peter Parker in the real world”. On the very first page we see hero Jasper Jenkins (alliteration is all the rage in comics) pulling a gigantic bong. Jasper’s obviously Spider-Man influenced alter-ego “The Bounce” can quite literally bounce of stuff like he’s made of rubber. The first issue gives us a peek into Jasper’s routine but ends in a pretty mysterious manner which will leave you wondering what the hell is going on.

Don’t be put off by the weird name. This new book is about old-time Spidey bad dudes “The Sinister Six” and what they get up to when they’re not getting their asses handed to them by the web-head. It’s actually an awesome read and most importantly, it’s hilarious. It’s a refreshing change from all the gritty, “WORLD CHANGING” stuff Marvel ships every week and it essentially boils down to hopeless criminals trying their best not to be so hopeless. Spencer throws in a bunch of funny references and a tonne of jokes that all hit the mark to boot. Recommended to all. 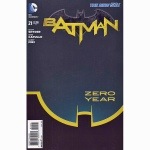 Despite the issue number, anyone can pick this up and read it without any prior knowledge of Snyder’s run so far. For this is the start of the much hyped “Zero Year” arc. Rather than another retread of Batman’s origins, this book, whilst focusing on a younger, freshman year Batman, tells the start of what’s set to be an epic tale from the early days as Bruce Wayne finally starts to form the hero we know so very well today. A great first issue with enough action and intrigue to keep you coming back next issue.

So there’s three books I enjoyed this week. Try them out. Let me know what you think. Or ignore me entirely and carry on having all of the sex.