The Avengers has been expected for almost 4 years. Since the first post-credits scene at the end of Iron Man, with Samuel L Jackson’s now famous words: ‘I’m here to talk to you about the Avengers Initiative.’ Ever since that day speculation has run wild, fans have gotten excited, and four other Marvel movies were released, all with the eventual aim of The Avengers. Finally, the cross movie referencing, the subtle hints, the expectations…they can all be put aside. Because The Avengers is here. And it is goddamn brilliant. 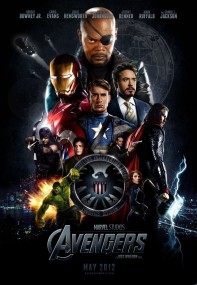 The Avengers is, hands down, one of the best movies I’ve ever seen. It’s easily the best superhero movie I’ve ever seen, discounting The Dark Knight. It does so much right, and so little wrong. For a start, the acting. The film has one of the best casts I’ve ever seen, most of whom have already had their own movie. It could be expected that they would clash, or that one would be favored over another. This is not the case at all. The dynamic between the characters is absolutely perfect. You can feel the tension between the group. Downey Jr’s Iron Man and Hemsworth’s Thor are a fantastic pairing, especially in one particularly memorable fight scene. Chris Evans does a great job as a man out of his time, and is a fitting leader to the team. Having said that, at times he annoyed me because of his idealism, but that’s more the actual character than Evans himself. Mark Ruffalo, who has replaced Edward Norton as Bruce Banner, is fantastic, and does a better job than Norton did. He gives the meek scientist a real personality, especially in contrast to the beast that is the Hulk. Speaking of which, the Hulk is done very, very well in this movie. The CGI is great, and the animations give him emotions beyond anger. You can really see how he feels, whilst still seeing his extreme power.

Jeremy Renner, who plays Hawkeye, and Scarlet Johannson (Black Widow), are the two characters who haven’t had their own movie, and both do a really good job. Scarlet isn’t overly sexual, instead having a clear sense of danger about her, and Renner gives a great performance as Hawkeye, adding depth to what could otherwise be a pretty tedious character. More importantly, Hawkeye has been treated as a serious character, as he rightfully should, with awesome technology and serious archery skill. He doesn’t feel out of place at all: in one scene he shoots an arrow whilst looking the other way. I wouldn’t be surprised if he got his own movie now: I’d be interested to see some more of his backstory, and it could be a Batman/Bourne kind of thing. But I digress. Samuel L. Jackson excels once again, and Clark Gregg (Agent Coulson) has some fantastic moments. And I’d be remiss to forget Tom Hiddleston (Loki) who is the perfect villain: believable, deluded, and downright evil. He’s a truly fantastic actor, and fits in with the rest of the cast wonderfully.

All these great actors come together in the best way possible, and act as a very solid backbone to the movie. The best scene in the movie for me was during a massive action sequence, when the camera panned from character to character, showing them all collaborating and generally kicking ass. The transition between them was silky smooth, and you got a real sense of unity. When I saw that scene, I almost squealed with excitement from finally seeing the team come together. 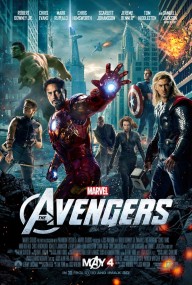 However, it takes a while for the team to bond, thanks to the excellent storyline. The basic plot is that Loki comes to Earth, decides to take over the world with an alien army, forcing The Avengers to form. Pretty basic, no? The plot is obviously a lot more complex than that, but I don’t want to spoil too much. Let me just say that every character has their moment, and there are some real heart-wrenching moments in the film. And then there are the action sequences. Some of the best action sequences I have ever seen. They blew me away. There are tons of action scenes throughout the movie, but three really stood out. All were evenly spaced, and ran on for just long enough. A smaller one at the start was brilliant, and added a whole lot of depth to Iron Man and Thor. The action scene in the middle was phenomenal, and at the point I was almost certain that nothing would ever top it. Then we got to the ending of the movie. We’re talking a 40 minute long beast of a scene. Explosions, martial arts, flying, plot development. Singlehandedly the best action scene I have ever seen. Think Transformers, but better, and with a plot. Then multiply that by 10, and you’ve got The Avengers.

Then you’ve got the script. It is great, proving once again that Joss Whedon is a genius. The script plays to each character’s strengths, with Downey Jr. getting a lot of the more humorous lines, whilst Evans is dealt the uptight leader role, ordering people around and grasping the situation by its head. Hemsworth still feels like he’s straight out of Shakespeare (a very good thing) with his eloquent vocabulary, and Jackson is a bad ass. There are some hilarious lines throughout the movie, and they were timed perfectly. The movie also knows when it should just stick to the action, and it does that well too, allowing for some pretty intense scenes throughout, where the dialogue is strained and the characters are clearly distressed.

I don’t know what else to say really. The CGI was really good, especially with Hulk and Iron Man. The 3D definitely added to the movie, making the action scenes ‘pop’ more, and actually adding to immersion. The movie was quite long, but it felt just long enough. It could have been split into two shorter movies, as it had enough plot and action, but the fact it’s all in one is just testament to how good Joss Whedon and the rest of the team are. If I had one complaint, it would be that the alien race (I’m not going to spoil who they are) aren’t really explained, and they don’t seem to have  much of a motive, which is unfortunate. However, the film spends so much time on the heroes that this is barely noticeable.

All in all, The Avengers is fantastic. I had a blast watching it, and was throughly blown away, on multiple occasions. It had practically no downsides, and everything about it is perfect. This is the best super hero movie I have ever seen, and it’s up there with my favourite films of all time. I want to go back and watch it again, to once again stare in awe at those delightful action sequences. This review does not do the movie justice, because words cannot do this phenomenal film justice. We’ve waited four years for this. It was worth waiting for.

Oh, and there’s a scene about 3 minutes into the credits. Avengers 2, here we come.