Why you will go and see Star Wars in 3D 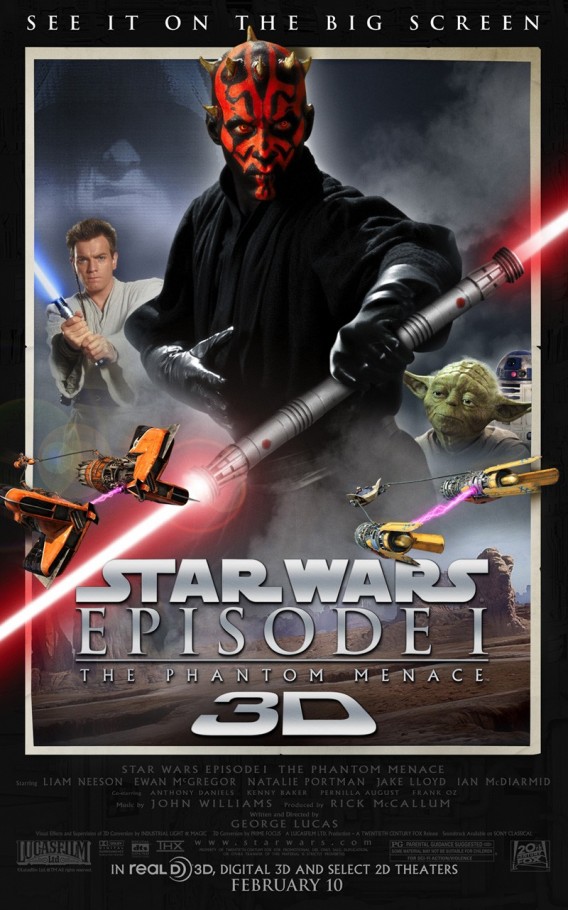 Feel the hate flowing through you.

Probably.
Starting on February 10th, George Lucas, The Sith Lord himself, will begin to release the Star Wars films in 3D, of course starting with Episode I: The Phantom Menace.
Whether you have loved everything ever spewed forth that is associated with the Star Wars universe, or if you’re of the opinion that the prequels failed to live up to lifelong expectations, every kind of fan will have been experiencing that tickle of curiosity upon hearing the announcement, no matter how strong it may be.
You may think “What if that extra dimension makes Jar Jar even more punch-worthy?” or “What if the invasion of Hoth becomes even more amazing with AT-ATs collapsing toward you?” and either way, you’ve probably come to your own conclusions already.Now, the digital meddling this time round isn’t going to make up for any problems you may have with the storytelling in any of the films, but it may very well just make the actions sequences that little bit more enjoyable to watch, and I think that’s a prospect we can all look forward to eagerly. Whether it’s the podracers screaming towards your face or the Emperor’s force lightning trying to burn your eyes, I think that occasional slight jump might add to the immersive nature of the films.

Even if George’s plans to release one film a year go ahead, between the theatrical version and the inevitable 3D Blu-Ray that follows it, there will be some more nuances to the Star Wars universe to experience, even if it is no more original content than a sprinkling of new, additional CG debris flying through space.

Personally, if I find myself with cinema vouchers going spare at the time, I’ll definitely think about going (I have a very good friend who’s a prequel defender and thusly a corrupting influence), even if just for the spectacle and nerdy curiosity of it all, or possibly in the vain hope that George Lucas has done something good with this project.

A Primer on Marksman Shrimp