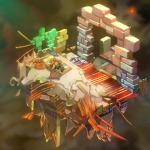 Bastion is a game that Talkingship has been following closely since it first caught our attention at PAX 2010.  It was part of the PAX 10, one of ten independently developed games that were showcased.  At that time, we named it our Game of PAX 2010.  Well, the game and the team at Supergiant have come a long way since then.  Bastion was published by Warner Bros. and is the first game in Xbox Live’s Summer of Arcade for 2011. However, the question remains: Does the game live up to the hype?

The answer is a resounding yes. Without giving away any story spoilers that you won’t see in the trailers, your character, The Kid, wakes up in a world that has been torn asunder by a horrific event. The only thing he, and by extension you, know, is that everyone was told to head to the Bastion when there’s trouble.  So you head off. 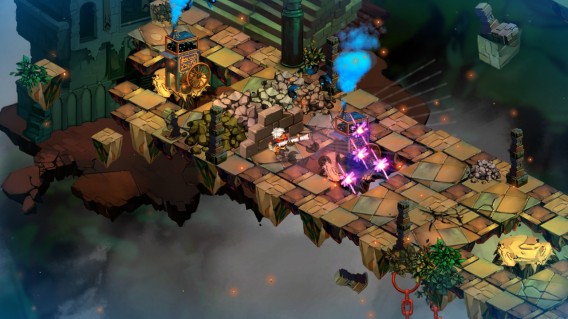 The gameplay is a sort of mix of Diablo II, Torchlight, and God of War in terms of complexity and mechanics, except with a locked isometric camera angle. There are a variety of weapons that you’ll encounter in the game, each with their own progression tree. These weapons are varied enough that any type of player will find weapons they are comfortable with.  I was surprised, though, at how much my preferred loadout changed as the game wore on, because of the steadily paced introduction of new tools of destruction. Another mechanic that encourages experimentation is the fact that you can only change your loadout at your hub world, not on the fly in an action sequence.  This forces you to become familiar with some of the nuance of each weapon as they are introduced to you mid-level.

Your character levels up over the course of the game, as well. The character leveling system is more methodical and I felt it was too slowly paced.  I finished the game at Level 6 out of 10. While the game heavily suggests going through it again in New Game Plus Mode (in which you take your fully leveled character and weapons back through the game again), you may feel like you haven’t experienced the full progression spectrum in one run through the game.  That is a shame, because the system is a solid one. Like the weapon enhancement tree, you select your character powerups when you level up as well, and can essentially respec your character at any point from the hub world that serves as the base of your adventure.

While the gameplay of Bastion is solid, it isn’t what makes this game truly special. Bastion is set apart from the legions of games like it by the aural and visual aspects that are finely crafted and woven into the game’s narrative.  The team at Supergiant opted to make this a stylish masterpiece with hand-drawn art as opposed to a realistic one, which fits the theme of the game perfectly.  This is a story meant to be told with lush, saturated, storybook-like visuals, and Bastion is strikingly beautiful in a way few games are.  The sound design of the game is well-crafted, too. Attacks and enemies each have their own distinct sounds, which fit the way they look and feel in the environment, but those sounds take a backseat to the main audio feature of this game: The Narrator. 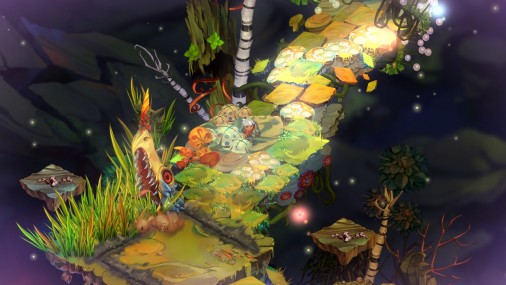 The richly painted environments are perfectly matched with Bastion's narrative.

The Narrator is an active companion throughout the adventure, guiding you through the story as an omniscient voice. Regardless of the quality of the story that’s being told, the delivery is spot-on and the gravelly, aw-shucks voice acting style is reminiscent of Ron Pearlman, if you’re looking for a point of comparison. The Narrator will transcribe your adventures, mixing the narrative in with dynamic descriptions of your actions, based on how well you execute them or what choices you make during the game. The narrative takes the foreground early in the game and the dialogue feels more linear the deeper you get in, but whenever The Narrator describes something you just did, it’s always a thrill. It would be an absolute spoiler to reveal the finer points of one of the other audio gems of the game, but suffice to say, there is an original piece of music that you’ll run across in this game that is haunting, descriptive, and pervasive. You will undoubtedly be humming, whistling, or singing this song to yourself for the week following the completion of the game.

I could go on describing the other reasons this game is positively worth the 1200 Microsoft points it will be priced at on Wednesday, such as the change-of-pace weapon skill and survival challenge rooms interspersed in the game or the fact that the length of the campaign makes it one of the better value propositions on Xbox Live, but the main reason is that this was a game clearly built on the passion of a few dedicated individuals. It’s clear that this was a labor of love for the team at Supergiant, and the end product is one in which they can take great pride. Bastion is a masterpiece of design and feel, and a solid mechanical game to boot. It gets 10 out of 11 ships.

Disclaimer: This review was based on a review code for Bastion supplied by Supergiant and Warner Bros. a week in advance of the game’s release. I completed the game fully through one time before writing this review, clocking in my final (current) playtime at 9 hours.