When someone mentions Freddy Krueger, the last thing that comes to mind is homoeroticism.  That is until now.  If you’ve listened to Talkingship About Movies Episode # 5 then you’ve already heard us talk about the blatant homosexual undertones of Nightmare on Elm Street 2 –  Freddy’s Revenge, but in this article I will lay out the facts for you and explain why this was one of the most daring slasher films ever made and clearly meant as an allegory to coming out of the closet. 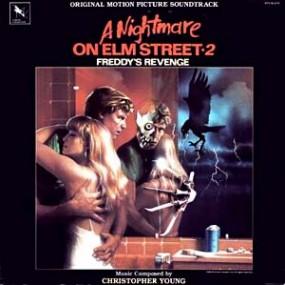 Noticing the gayness within!

The original Nightmare on Elm Street was released on November 9th, 1984.  With a paltry budget of just $1.8 million, the horror classic went on to rake in $25.5 million at the box office (double that by today’s standards and you can see that it was a pretty big success.)  New Line immediately knew they had a hit on their hands and set about creating a sequel despite the fact that Wes Craven was decidedly against the idea.  He refused to have anything to do with a sequel, leaving the movie in the hands of whomever New Line could convince to make it.  To capitalize on the success of the original, they wanted the sequel to release in just one year.

A screenwriter, director, and cast were all put together in short order, and the company’s rush to make this movie probably plays a big role in how such a controversial, homoerotic movie was released in theaters.  I doubt any of the suits at New Line had any idea what the subtext of the movie was – all they cared about was if it had Freddy Krueger in it and if teenagers got killed.  I have a hard time believing that New Line would have approved the script if they had realized that it was intended to express the tribulations of a gay teen through the allegory of a monster within.

The movie starts with a dreamed bus trip in which the main character is ostracized by the rest of the people on the bus.  The film goes to great lengths to show that the girls on the bus are laughing at Jesse, the main character (played by Mark Patton, an out of the closet homosexual who had previously starred in Come Back to the Five and Dime, Jimmy Dean, Jimmy Dean, as an effeminate character.)  This is of course here to lead the audience to the conclusion that Jesse has a tough time with the ladies – not necessarily a purely gay theme, but it lets us know that he is having trouble relating to the opposite sex. 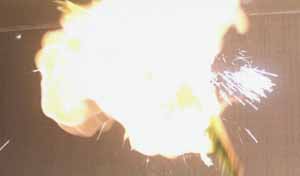 The exploding bird is one of the funniest parts of the movie. Damn firecrackers!

Next, we are shown the strained dynamic of Jesse’s home life.  His parents are old fashioned and would seem more comfortable in a film from the 1950’s (by the way, Nerves wears the exact same horn rimmed glasses as the father in this movie – creepy.) His sister is annoying and Jesse can’t relate to any of them.  Again, this isn’t an exclusively gay theme, but it is showing us that Jesse doesn’t fit in anywhere.  This is a common theme in a lot of horror films, but in this one the writer is trying to establish the fact that Jesse isn’t like any of the people around him.  Also, I’m not sure what to make of the way his father insists that the air conditioner isn’t broken (maybe Jesse is a flamer?  That’s reaching a bit.)  But the payoff of the warmth is the exploding parakeet scene, which is so funny is has become legendary. 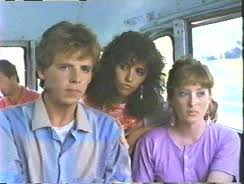 Jesse ain't got time for girls!

When Jesse meets his female friend, Lisa, we finally start to see the gay theme coming to light.  Lisa is infatuated with Jesse, but right from the start we get the idea that Jesse isn’t interested in her sexually.  Whether it is his disinterest in everything she does or the way he insists to his friend, Grady, that he isn’t having sex with her.  Then Jesse and Grady start to form a friendship as they are being forced to work out together by their coach following a fight in which Grady seems to be intent on pulling Jesses’s pants off.  In a discussion on the football field with Grady, Jesse learns that their coach is actually gay and that he frequents a local bar.  This is where the movie goes from being a simple slasher film sequel to a more complex gay youth tale.

If you forget everything you know about Freddy Krueger and instead look at him as a subconscious manifestation of Jesse’s gay desires you will quickly see my point.  Jesse is trying to be a normal teenager, but there is something inside of him that wants to get out.  Now replace Jesse’s desires to “kill” with the desire to have gay sex and you will again see what this movie is trying to say.  Freddy represents Jesse’s burgeoning desires, and after several nights of dreaming of Freddy, Jesse finally decides to do something about it.  What does he do?  He goes to the gay bar that Grady was telling him about!  And guess who he finds there? His gay coach! 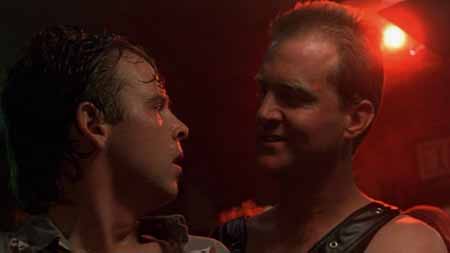 It's either a gay bar or a leather enthusiast convention

The two of them go back to the school gymnasium for reasons I simply can not explain.  It is there that Jesse “kills” for the first time.  Now the film begins to focus on how Jesse feels bad for what he has done, and he turns to his female friend, Lisa, for help.  He doesn’t want to be a “killer” (ie gay) and needs her help.  At a party he even begins to make out with her, but just as he is about to take her shirt off, Freddy’s tongue comes out of his mouth.  He finds himself disgusted and runs away.  Where does he run?  To Grady’s house of course.  He begs Grady to let him sleep there and guess what happens… Jesse “kills” Grady.

Jesse is horrified by what he is now realizing is really hiding inside of him and he runs to Lisa again for help.  He insists that he is gay… whoops, I mean a “killer” and she tries to tell him he isn’t.  This is really where the film is putting it’s gay theme on the table in full force.  If you aren’t looking at this as a gay movie then this scene makes no fucking sense at all.  Jesse is literally covered in blood and Lisa has no reaction to it whatsoever.  If you’re trying to watch this movie and ignore the gay subtext then this must be where you throw up your hands in disgust with the plot.  They seriously never even deal with the fact that Grady was “killed!” That’s because he wasn’t killed, he just got butt plundered. 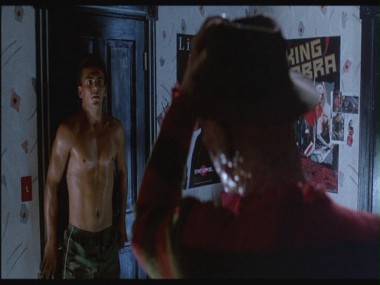 Ready for some Butt Plundering... erm, I mean killing.

The next scene is sometimes used as an argument that this isn’t a gay themed movie.  Freddy appears at the party and begins randomly killing everyone in sight.  There is no way that you can attempt to say this is meant to represent homosexual sex.  However, if you watch all of the party scenes you will notice a very blatant theme: heterosexuality.  Everyone at the party is kissing, having sex, or about to have sex.  Then, as Jesse and Lisa are talking in the house, Jesse begins to have his urges, which Lisa tries to convince him to fight off.  This results in Freddy raging, bursting out of Jesse, and attacking Lisa.  Jesse forces Freddy to leave Lisa alone, but Freddy’s rage needs to be satiated.  He leaps into the party and begins killing people in a bloodbath unlike anything seen in the series before or after this.  I would contend that two things are happening here.  Number one, the scene is meant to show Jesse’s rage at his heterosexual peers, and second, that the screen writer knew this film would be chastised if Freddy only killed two people throughout the entire thing.  So they needed some senseless violence. 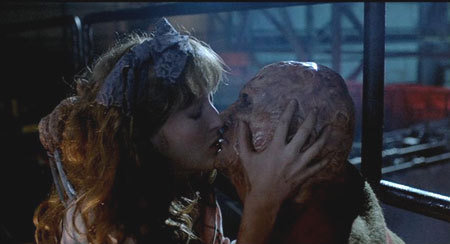 Anyhow, the next scene is where the movie surprises me.  I would have expected a gay themed film like this to try and express how it’s okay to be gay and that the people around you need to accept it. But no sir.  This movie seems to have been written by someone who believes that being gay is a choice and that people can fight off the desire.  The entire climax of the film centers around Jesse fighting his desires and eventually defeating the monster within.  It even goes so far as to show Jesse and Lisa embracing and kissing to kill the demon – remember that this never happened before as Jesse always acted repulsed by Lisa.  Finally, in the end, Jesse is able to defeat the evil desires within him and is finally a heterosexual.  Seriously.

While I wish the film would have been a little more pro-homosexual at the end, I still find it fascinating that this made its way into theaters.  I never picked up on the theme as a child, but it is impossible to miss when watched as an adult.  Nightmare on Elm Street 2 doesn’t fit in well with the franchise, and the following movies abandoned all attempts at allegory, choosing instead to focus on funny kills.  That is the reason that I like this movie as much as I do.  I appreciate the filmmaker’s desire to make something more intriguing then your average horror slasher.  Love it or hate it, you have to agree that Freddy’s Revenge is the most complex of the series, and it deserves to be seen. 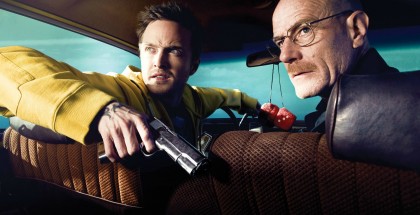