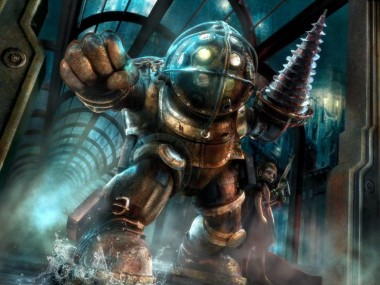 Big Daddy and his Little Sister

Ask most gamers what video game would make a great movie and you’ll get a pretty eclectic list.  Passions run hot about which game has the most interesting narative, but there is one game that seems to make it onto everyone’s list: Bioshock.

While The Little Mermaid has been the defacto “Under Da Sea” icon for over two decades, the director of the Pirates of the Carribean movies has decided to walk the plank and try his hand at film-making in the deep blue (or film PRODUCING anyhow.)  He has been a champion of turning the dark, ominous world of Bioshock into a major motion picture.  In fact, the movie is already slated for a 2013 release!  However, they’ve just hit their first major snag in production: The studios want it to be a PG-13 film.

Hollywood isn’t convinced there are enough adult gamers out there to warrant making an adult video game movie.  I guess they’re ignoring the fact that video games have already eclipsed movies in earnings.  Take into consideration that currently the number one movie in the United States, The Expendables, pulled in $65 million in two weeks.  Now compare that to the current best selling video game: Madden 2011.  Madden has sold over a million copies in one week (1,014,305 to be exact) which means it has pulled in only ten million less then The Expendables in half the time!  Perhaps Hollywood thinks those are all kids buying those games… they’re wrong.  According to recent statistics, 60% of people in the United States play video games, and 65% of them are over 18.  That means you have nearly 110 million people in the United States that are in your demographic for a R-rated, video game based film.  While the corporate logic of tacking on an extra 30 million potential viewers by making it PG-13 sounds reasonible, it’s not, and I’ll explain why.

Bioshock is a very mature title.  It deals with some dark stuff, and many of the visuals still haunt me (seriously – Andrew Ryan and the golf club.  Wow.)  Any gamer who has played Bioshock is intimately familiar with this style, and they are going to expect it in the movie.  If word gets out that they are changing things in the adaptation to accomodate a weaker rating, then you can count on a large percentage of the fan base rejecting the movie.  While I normally agree that including gore and nudity in a film is not integral to the storyline, one of the main issues that the studios have with Bioshock is far too important to let slide.

One of the iconic images in the world of Bioshock are the Little Sisters.  These little girls in summer dresses with ponytails and devilsh eyes that wander around the underwater city collecting samples from the dead and dying while being protected by their Big Daddies are the creepiest, most awe-inspiring element of the game – and Hollywood wants to change them.  They think the idea of little girls stealing blood samples from bodies is just too much, so they don’t want them doing that.  They would prefer if the Big Daddies, those lumbering, oil-drilling diving suit guys, are the ones that steal the blood and then give it to the girls.  I cry foul.

Just say no to Hannah Montana!

One of the first images that ever got me hooked on the Bioshock world was the scene where you first see a Little Sister as she creepily approaches a dying man, then plunges the syringe into him.  It was demonic, and it was intoxicating.  From that point forward I was a devotee of the game.  Just put out the RUMOR that this scene is out of the film and it loses me immediately. In fact, why would you ever want to take something as inventive and interesting as that scene OUT of a movie?  Because Hollywood doesn’t give a shit about art, it only cares about money and it’s willing to irrevocably alter a great story and a haunting scene just to make a few more bucks (suck on THAT Roger Ebert.)

The good news is that this isn’t a done deal.  Gore Verbinski is fighting tooth and nail to keep this movie intact, no matter what rating the MPAA gives it.  Let’s all hope he can win this battle, because I don’t want my Rapture to have Hannah Montana posters in it so the tweenies will come.  Fuck the tweenies.

Finally, it should be noted that there is a third option in all of this.  The studio says they are willing to make an R-rated Bioshock, but they will severly slash the budget if that is the route Verbinski wants to go.  While I’m a champion for low-budget filmmaking, this is not the movie to prove my point with.  Bioshock is far too grand a world to create on the cheap, and if the entire thing is shot in CGI then it will look terrible.  Also consider that the studio has already expressed interest in turning this into a franchise and are looking into the possibility of making a movie version of the next game, Bioshock Infinite, and you’ll realize that the decision they make on the rating of this first film is going to have wide-reaching effects.  The last thing I want is for the budget to force this to become a SyFy Channel masterpiece! 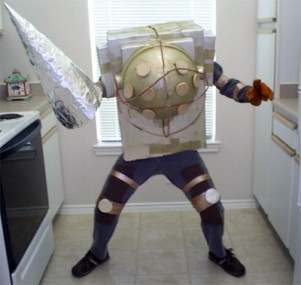 I hope that Hollywood breaks off it’s engagement with the Super-Hero genre and starts to take a look at what video-games have to offer, but before that can happen they are going to need to see a hit on the screen.  A PG-13 Bioshock will not be a hit, and it will temper their excitement for the vast amount of excellent storylines that exist in the videogame medium.  Let’s all cross our fingers in support of Gore Verbinski in his quest to give us the movie this game deserves!