Late to the Game : Injustice – Gods Among Us

I don’t usually buy fighting games. It’s not that I don’t enjoy them, it’s just that it rarely feels like it’s worth $60. There are exceptions, such as Soul Caliber which gives you a wealth of side activities, and Dead or Alive which gives you a wealth of jiggle-physics, but usually I don’t feel like I’m getting the most for my money. However, I bought Injustice for the PS4, partly because I was having a “NEW SYSTEM” high, and partly because I was drunk and gaming with a friend – mostly the latter.

At first, Injustice struck me as just another fighting game, with nothing to really distinguish it other than the characters in it. This game features characters from the DC comic universe, as well as Scorpion from Mortal Kombat (because this game is made by the folks that brought us MK, but don’t worry, you won’t be seeing Bane rip Batman’s skull and spine out – the violence is nowhere near MK-level). Playing versus mode with a friend is everything you can expect it to be. The fighting is smooth, and the special moves are entertaining and easy – there’s no need to worry about breaking out spreadsheets detailing how to achieve your character’s ultimate finishing move, in this game you just jam on the triggers at the same time – easy as that. 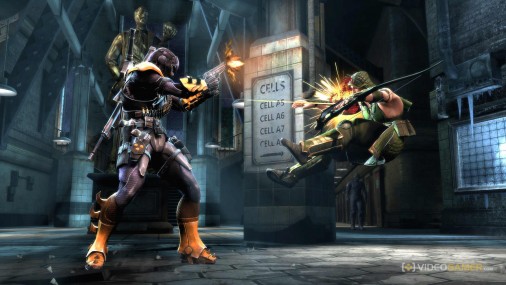 I’m not the person to talk to about the complexities of fighting games. I have no desire to compete at tournament level with these, so I can’t comment on whether or not some characters are overpowered and all that. For me, a fighting game needs to achieve two things: 1) It needs to be fun to play while drinking with friends. 2) It needs to be fun to play with my children. Injustice achieves both those marks, and thus it has earned a place in my stable of games for a while (also, I downloaded it, so even if I wanted to sell it for $3 at Gamestop, I couldn’t).

As to whether or not this game is worth $60, I struggle to say that it is. I will, however, admit that the single player campaign was an absolute joy. It’s short, but if you’re a comic book fan – even just a little bit – then this game will tickle your fancy in a hundred ways. It feels like a universe-wide cross-over ‘event’ that occurs in the Marvel and DC comic worlds from time to time, with various characters being thrown together and forced to fight one another for some reason. Injustice creates an alternate world storyline that helps explain why these characters might face off with one another, and then has the player switch between various characters as the game progresses, giving you a chance to experience a decent amount of the variety that playing different characters offers.

You can also play the game as a standard, tried-and-true fighting game, by picking one character and then beating others until you reach a final boss, but that mode is painfully archaic and only worth doing to see the unique endings given to each character. If that sounds appealing, then you’ll have your work cut out for you, because Injustice Ultimate Edition gives you 30 playable characters!

At the very least, I think the single player of Injustice is worth a rental. However, if you’re the proud owner of a PS4, and a fighting game fan, then this is unfortunately your only option. If you’ve got an Xbox One, perhaps Killer Instinct can provide you with what you’re looking for, but I dare say Injustice wins simply due to the familiarity of the characters and the intriguing single player. Also, there’s a huge amount of satisfaction to be had watching Joker fight Batman. There’s a certain amount of childish glee to be had at watching Joker pour gasoline over Batman and then light a match before basking in the glow of his burning corpse. Where’re my marshmallows?! 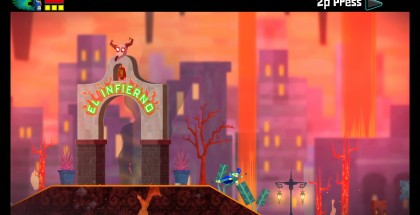