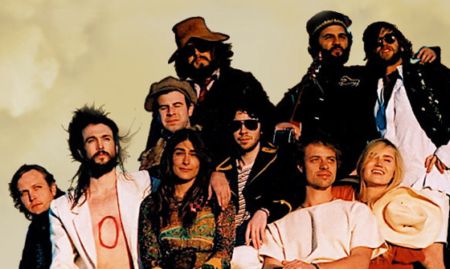 Alex Ebert isn’t wasting any time. After forming Edward Sharpe and the Magnetic Zeros in 2007, the large assortment of musicians (at least ten regulars with quite a few more lending their talents while touring) have already put out three albums, with the front man, Alex Ebert, having put out a solo album in the interim between the second and now third regular album. Considering this band is well known for their frequent tours, it’s amazing how much music they’ve been able to produce in a fairly short period of time.

Their first album, Up From Below, is astonishingly good, and was an instant favorite. The follow-up, Here, is certainly good, but it lacks the poignancy and ebullient lyricism of the first. It got mired in an a devotion to religiosity, which peppers a lot of their music, but addled Here.

Now the band has released their self titled third album, and it’s time to find out if the band has returned to the glory of Up From Below, or if they’re headed into a bad direction after Here. I thought the best way to review a band like Edward Sharpe and the Magnetic Zeros, who sets a mood with their music, would be to go along for the ride with them on their latest effort and listen to it straight through, critiquing each song as it comes. After each song, I’ll say whether it’s worth a purchase or not, then we’ll add it all up and see if you should piecemeal this album or just go ahead and buy the whole thing.

Track 1 – Better Days: This is the radio anthem of this album, and it deserves the status. It’s infectious in all the right ways, and you’ll find yourself singing along even during your first listen. While not quite as good as Man on Fire from Here, or several songs from Up From Below, it’s still great. Also, if you haven’t seen the video for the song, then do yourself a favor and watch. BUY IT!

Track 2 – Let’s Get High: This song is fun, if not a bit fluffy. It’s well known that Alex struggled with drugs at one point in his life, and this song expresses the idea that love is a better drug than any illicit substance. However, the song ends on a horrible note, with a bizarre chant that makes me grimace. I struggle a bit with whether or not to recommend this one, because it starts off so well, but halfway through it just falls apart, and gets worse as it goes on. The final nail in the coffin is that stupid “man in the mirror” chant that ends it. SKIP IT.

Track 3 – Two: Hate to say it, but this song kinda sucks. It’s another love anthem; a simple back and forth between Alex and Jade that is reminiscent of some of the dull tunes John and Yoko delivered thirty years ago. This one’s a bit of a snoozer, and not a great sign for what the rest of the album has in store. Sadly, this will end up being the only duet between Alex and Jade on the album, which makes me want to give it a pass, but I’m not going to. SKIP IT.

Track 4 – Please: Alex starts this song out with an attempt at a higher octave, and I’m not sure it works. I take that back, I’m sure it doesn’t. I’m again brought back to my John Lennon comparison, and this song reminds me of his far superior song, Love. Afraid to say it, but this song is awful. SKIP IT.

Track 5 – Country Calling: After an inauspicious start, the album returns to the tone set with the first song here. Country Calling isn’t a song that’s going to be a favorite, but at least it’s fun to listen to. I think this is one that would be better served by a live recording, and I could see the talented musicians in the band having fun on stage with the varying instruments that this song employs. BUY IT!

Track 6 – Life Is Hard: This is another one that I’ve heard played on NPR already, and it’s probably my favorite song on the album. This is, thankfully, better than anything on their last album (with perhaps the exception of Man on Fire), and comes damn close to being as good as what I think is their best song, Up From Below, off their first album. Jade’s vocals here sound a bit muddy, and I look forward to getting a live version of this song in the future. In fact, there’s already a better version of this song out there, although I’m not certain it’s available for download, from their appearance on David Letterman recently. BUY IT!

Track 7 – If I Were Free: It feels like the album is finally getting into gear. While I’m not entirely sold on the variety of instruments used in this song, I still appreciate the mood it sets. This song is more emblematic of why I fell in love with this band in the first place. If I Were Free is fun to listen to, and while it has shades of the goofier songs from The Beatles (at times this feels like an ode to Yellow Submarine), I’d still rather listen to an album full of this than what the band was offering just a few tracks earlier. BUY IT!

Track 8 – In the Lion: An infectious, simple bass line and the thumping drums help turn this one into a foot tapper. This will be one of the songs I transfer over to my iPod, and I can already see myself bouncing along to it as I do chores around the house. It never reaches the heights of the band’s best songs, but it’s still pretty damn good. BUY IT!

Track 9 – They Were Wrong: This song starts elegantly, with a mellow sense that hasn’t been represented on the album yet. Alex’s vocals are more ominous, and the song labors a bit as he struggles with the darker tone. This is a departure from what the rest of the album has given the listener, although that’s not necessarily a bad thing. Throughout the whole song, I felt like it was leading up to a crashing change, but it never really comes. I don’t think this one’s going to make it onto any of my playlists. SKIP IT.

Track 10 – In The Summer: The name makes me cross my fingers that we’re about to get another infectious groove, and while this song is a little on the mellow side, it lends itself well to drinking a beer on the porch on a hot summer night. I’d be happy with an entire album of innocuous tunes like this, which is sort of what we got with their last album, Here, except this time the groove isn’t bogged down with churchy preaching. BUY IT!

Track 11 – Remember to Remember: Jade gets a chance to shine here, and I always appreciate her gospel-inspired, hip wavering, arms raised style of singing.  There’s nothing here that’s particularly memorable, but it’s still a good song, and flows well with the album as a whole. If I walked into a record store and heard this song playing, I’d ask an employee what band it was because I enjoy the mood it sets. BUY IT!

Track 12 – This Life: The final song on the studio album (the next few songs I go over are bonuses given to people that download the album on iTunes) has the responsibility of capping an overall mixed effort. I’m happy to say that it does it’s job well. Reminiscent of the darker tone that Alex took with They Were Wrong, this song starts slow and heavy, but builds quickly and gives me a solemn anthem that I’ll listen to frequently in the future. The rises and falls in this one are actually representative of the album, and it definitely leaves me feeling good about the album as a whole. BUY IT!

Track 13 (bonus track) – Give Me A Sign: Poor sound quality hinders this simple, happy tune. It improves as the song goes on, and halfway through Alex and the band bring the energy up just enough to make this one worth getting. By the time it’s over, the song won’t leave you humming a tune or singing a lyric, but you might just be tapping your toes, and that’s not so bad. BUY IT!

Track 14 (bonus track) – When You’re Young: There’s been a Beatles theme with this review, and it continues here. Alex kicks this one off with a decidedly Ringo-style vocals, and with the twanging guitar I can almost see George Harrison sitting Indian style beside him. None of that’s a bad thing (Ringo haters be damned) and I found myself sort of digging this song’s 1960’s effervescence. BUY IT!

Track 15 (bonus track) – Milton: Following in the footsteps of the last song, this one takes the goofiness up another notch, and that’s not a good thing. Where track 14 was a fun experiment with bubbly lyrics and boinging instruments, this one gets bogged down in it. If a carnival played a song while it obliviously sank into a swamp, this would be its anthem. And then, as if the bog finally swallows them, it ends. A rather sour note for the album. SKIP IT.

The final tally for the album is 10 BUYS and 5 SKIPS, which isn’t bad at all. Considering a single song download (on iTunes) will cost you $1.29, it’d cost you $12.90 to buy the songs I suggested, and the whole album can be downloaded for $11.99, so go ahead and get the whole thing. Just be prepared to cringe at a couple of the songs that don’t hit the mark. All in all, this is a better album than their last effort, and that’s a relief. I’m happy to be able to recommend the album, and I hope you enjoy it as much as I did, if not more.

This Technology is the Future of Gaming

PS4 & Oculus Rift to be Playable at Eurogamer Expo

Getting Music To Your Ear Holes January 16, 2012 | Jitterbug