An open letter to Terry Cavanagh, creator of Super Hexagon.

Earlier this year, you released a game for iOS called Super Hexagon. On Tuesday, this game is being released on PC and Mac. You would think this would be joyous news. Unfortunately, I beg to differ. You see Terry, I hate your game. More importantly, I hate you. 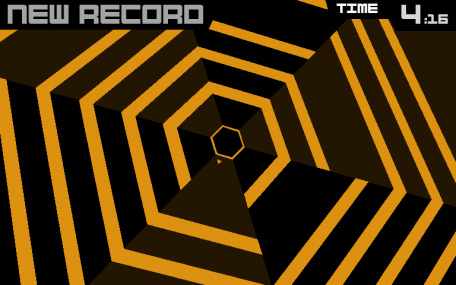 I hate you for tricking me into thinking that I was done with Super Hexagon when I stopped playing it on my phone in late September. I hate you for now hooking me back in with your Steam release of the game. I hate you for the countless hours I will spend sitting at my computer, moving an arrow between shapes.

I hate you for the hypnotic and upbeat chip-tune music, which sounds retro but retains a distinctly modern feel. For the awful memories I recalled upon hearing it again after 2 months. For the fact that the music starts in a different place each time, preventing any sense of repetition. For the perfect synching of the music to the gameplay. For including the robotic woman’s voice when you restart the game, which I must have heard close to 1000 times now.

I hate you for the mesmerizing visuals, which I could stare at for days. The flashes between colors. The colors themselves, bright and vivid. The patterns you begin to see in the background after staring at your screen for too long.

I hate you for making such an addictive game. For making it so very easy to restart after dying yet another time, and for including no reason not to restart each time. For making 30 seconds feel like hours. For making 60 seconds the defining goal in my life right now. For making the leaderboards so easy to check on Steam. For the six achievements that I shall spend the rest of the month striving towards.

I hate you for how perfectly the game has been ported over to Steam. For how much nicer the visuals look on my Retina display laptop. For how quickly the game boots, and for how small the download is. For the perfectly responsive arrow-key controls. For the increased benefits of using a significantly larger screen. For the removal of all distractions, making it even easier for me to get sucked in for hours.

I hate you for making the easiest difficulty setting ‘Hard’. For the exponential jump to ‘Harder’ and ‘Hardest’. For the patterns that repeat themselves to a degree, but then change suddenly. For the change from hexagons to pentagons to squares and back again. For the rotating camera, which causes my brain, on occasion, to melt. For the creation of the Hyper modes, which I can only imagine must be the invention of a sadistic psychopath. For the insane reflexes I need, despite the improved controls.

Most of all, I hate you for making me love this game. For making me love something that should in no way be loved. Something evil and twisted, something that sucks time and happiness out of me, something that is frustratingly hard and even angering at times. Yet I love it regardless. I get a feeling of pure satisfaction when I break my high score. An even more rewarding feeling when I complete a level. And so I strive to keep playing, to relive that feeling. It’s like a drug. You, Terry, have somehow created a game that I absolutely love. I’m pretty sure that makes you very evil indeed.

Super Hexagon is out on Tuesday 27th November on PC and Mac (reviewed). It is already available for iOS.

PODCAST: The Gamebang #27 – The Harmonica Edition