A look at Ubisoft’s crazy FPS.
Far Cry 3 is big. The developers are saying it’s ten times the size of Far Cry 2 (which was already pretty damn big). However from what I played, it isn’t wasted space – a criticism of the second instalment. Admittedly, the preview level didn’t give you free reign in the full map, but from what was on show, there was more than enough to explore.
Starting off in a small town, I wandered over to a jeep parked on the outskirts and set off down a dusty road. The driving feels superb, with the suspension bouncing up and down as I passed over the uneven terrain. About five minutes down the road I noticed a roadblock and before I knew it bullets shattered the windscreen. I floored the accelerator and spun left into the leafy, green jungle. Not the friendliest of greetings then – but this isn’t a very friendly island.
Eager to lose my pursuers, I weaved around trees and crashed over fallen branches until I noticed a small knoll looking over miles of gorgeously rendered beach far below. Perched on top of the knoll was exactly what I needed to escape the madmen that were so focused on gunning me down. A hand-glider. Screeching to a halt, I jumped out of the car and made for the hand-glider. With the shouts and screams of my enemies growing louder, I grabbed the handles and launched myself from the cliff-top, coasting blissfully through the clear blue sky.

That’s Far Cry in a nutshell. What started out as a pleasant rural drive quickly descended into chaos and I barely escaped alive. The island is extremely hostile and just going for a leisurely stroll can lead to all sorts of conflicts. One such conflict came about when I stumbled upon an enemy camp, where it’s safe to say I wasn’t welcome. The gunplay feels weighty and satisfying, with weapons raw and powerful. Annoyingly, enemies retain the same bullet-sponge characteristics that were present in Far Cry 2. There’s no way a man wearing nothing but a tank top and a bandana can get back up after 5 AK-47 rounds to the chest…hang on, he was wearing trousers too, I swear! Of course if you fancy yourself as more of a silent assassin, you’re welcome to quietly work your way through enemies. Using your knife feels satisfyingly lethal and you can quietly drop enemies from range with the crossbow.
The preview code I played was running on a high spec PC. It really did look fantastic: it’s a stunning island setting brought to life by great animations and believable NPCs. It almost certainly won’t look as good on consoles, but here’s hoping it retains at least some of the graphical polish on display when it hits PS3 and Xbox 360 next month.
If the much hyped story lives up to suggestion, Far Cry 3 is looking like an essential purchase for those who want their free-roaming shooters coated in a little insanity.
Far Cry 3 hits Playstation 3, Xbox 360 & PC on 30th November.

Assassin’s Creed: Where Can it Go Next? 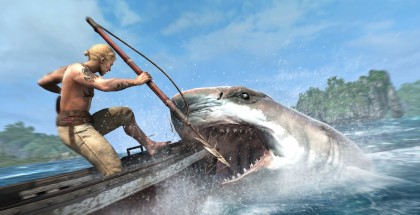