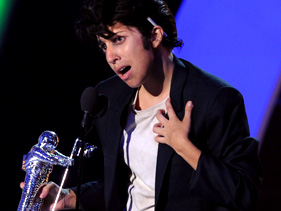 Lady Gaga dressed up as a boy - That's music!

On Sunday night, MTV held their annual Video Music Awards, where celebrities trot around dressed in ridiculous outfits and pose for pictures that will be splayed out across a hundred tabloids over the next several days.  The cameras flash, the paparazzi (who the celebrities are supposed to hate, right?) gather, the fans swoon, and the music industry sinks a little lower in their shit-filled grave.

Did I watch the VMAs?  Fuck no.  Why anyone would waste their time watching drivel like that is beyond me.  Then why am I writing an article about them?  Because I’m sick of watching the music industry pantomime interest in musical talent.  Enough is enough.

I love music.  There is no other artistic medium that moves me the way music does.  The highs and lows of my favorite songs take me for a roller-coaster ride of emotion that absolutely no movie, book, or picture could ever hope to achieve.  It is a treasured art form, and MTV smeared shit all over it.

When MTV first came on the air, they famously played the video from The Buggles, Video Killed the Radio Star.  It turned out to be a prophetic choice, as the sudden exposure that bands experienced would end up not only killing off our favorite radio stars, but would eventually drive a nail deep into the coffin of popular music from that moment forward.  Until the early 80’s, the way to succeed in the music industry was to have talent.  That’s not to say that the 50’s, 60’s, and 70’s weren’t rife with dirty, wiggling corporate fingers.  Hell, Motown is considered one of the greatest hallmarks of music history, and it was basically a hit-maker studio similar to what we see happening today.  The difference was that the vast majority of the industry was more interested in creating good music.  The “look” of a band was never something that people thought about.  Once people could see their musical icons on television, the comeliness of the people making the music became far too important. 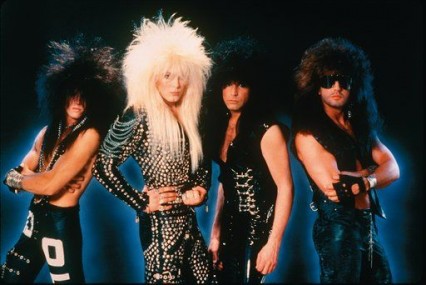 I can practically SEE the music jamming out of that hair!

Would Madonna have been as famous as she has become if her music was ever only heard on the radio?  Would heavy metal bands have started pasting make-up all over their faces? Would the evolution of rock and roll have stalled throughout the 80’s if not for the sudden emergence of video?  Sorry, the Allman Brothers weren’t pretty, but their music was revolutionary – too bad they didn’t start wearing make-up!

Once MTV had effectively stolen the money out of the pockets of the people that were making the best ‘music’ and handed it over to the prettiest people that could pluck out a few chords, they decided their effort to demolish the music industry had only just begun.  The 80’s were dominated by weak-skilled models whose music had been written for them, but when the 90’s came around something happened that was unexpected.  The music industry revolted.  Suddenly a new style of music erupted called ‘Grunge’ and the common denominator between the bands in this movement was their hatred for the over-stylized beauty of the music industry.  MTV did everything it could to kill this movement by turning Grunge into a fashion statement, then ultimately dumbing it down into what we now call ‘Alternative’, but they did something else far more devious.  MTV stopped showing music.  Suddenly, the channel that was supposed to be devoted to music, stopped showing music.  Half the time the station was showing Reality TV shows, which would eventually help to destroy all of modern culture, but that’s another story all together.  Without warning, music fans were forced to wait until late at night before MTV would show videos anymore.  Music Television had nothing to do with music. 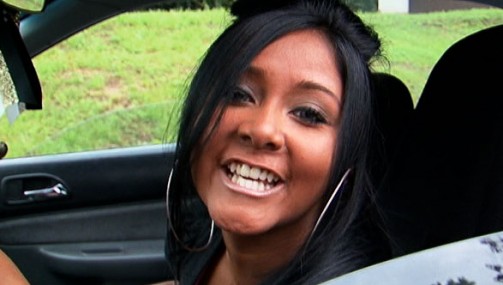 Meet the new face of "Talent" - GOD DAMN IT THIS PISSES ME OFF!!!

This grew worse as the century ended, and the music industry struggled to get MTV’s attention by churning out worthless “talent” like the Backstreet Boys, Britney Speers, and a bevy of other mindless chatter box husks.  But MTV was steadfast in it’s mission to forever ruin music.  They pushed forward, creating more and more reality television shows, until they hit their zenith (or nadir as the case may be) with Jersey Shore.  This show, which became the most popular program they ever produced, has accomplished what MTV had set out to do from day one: It ruined America.

Now MTV is just gloating.  The VMAs this past weekend supposedly featured some sort of music, yet I have not seen a single bit of news to hit the net that talks about ANYTHING ABOUT MUSIC AT ALL!  Wait, I take that back.  I saw someone say that Beyonce was singing before she showed off her stomach declaring that she was pregnant.  It wasn’t the song that people were talking about, but the fact that she was pregnant – you know, the sort of thing that is supposed to be news in a tabloid, not at a FUCKING MUSIC AWARD SHOW!

MTV doesn’t care about black people.  Wait, I screwed that up.  MTV doesn’t care about music.  We need to realize this and let it go, before our children’s brains slush their way out of their ears.  Hey Direct TV, go ahead and cancel my subscription to MTV, because I’m never going to turn it on again. 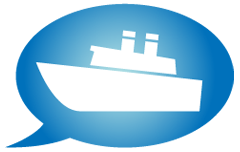